Sorry for the delay, I’m sure some of you have been waiting for a while for the Top 5, but I had a bit of a recovery weekend after new year’s eve. Lets just say I didn’t get much sleep. Anyway here are the Top 5 songs of 2010 that, if you were a part of the club scene at all, you already know and love. These song are just as amazing as the rest of the Top 20, but they all have a little something special that separates them, you know, that little bit of kick that makes them some next level shit.

5. “We No Speak Americano” – Yolanda Be Cool & DCUP: This song debuted in the early months of the summer, and sort of became that annoying song that grows on you to the point that when it comes on in the car, you roll down the windows, and turn the speakers up. Using a sample from the 1965 “Tu vuo fa l’americano” by Renato Carosone, the Australian duo beautifully composed the ‘go to’ song of the summer, making it the perfect candidate to round off the Top 5 Bangers.

4. “Barbara Streisand” – Duck Sauce: Comprised of two artist’s who have shot up the ladder to super stardom on the electronic music, Duck Sauce has created a hit that at first you’re like wait what, but then you simply cant get enough Barbara Streisand. Armand Van Helden and A-Track got together in NYC and have hit the big time. This song is all of the Radio 1 and is making its way back to its home turf. Being a huge hit in underground clubs and slowly emerging to the main scene, this Disco House song has definitely earned the number 4 spot. As a side note, it has also been remixed about a million times, and in my book that means it’s a good song.

3. “Stereo Love” (Molella Remix) – Edward Maya & Vika Jigulina: You all know it, and may or may not have referred to it as “that accordion song”. This was one of the summer anthems of 2010. It was a staple at Sunday Fundays on many a rooftop bar, and just a true club banger. Edward Maya hails from Romania and is a DJ/ live accordion player, thats right, he plays the accordion at his live gigs. Vika Jigulina is the accompanying vocalist, and delivers a stunning performance that tickles the spine. She’s also a Russian born, Romanian DJ and producer, as well as a mega hottie.

2. “Ghosts N Stuff” – deadmau5 ft. Rob Swire: Being, in my opinion, the electronic music Artist of the Year, deadmau5 has performed at the Olympics and was the resident DJ at the MTV VMA’s all in the same year for Christ’s sake. He can be played as as an avatar in DJ Hero 2, and has had an incredible year on both US and UK singles and dance charts. As far as my favorite artist of the year, I’d say he is tied with the number one spot, but simply due to stats and politics, Ghosts comes in at number 2. deadmau5 is seemingly always working on something new, fresh, and cutting edge, so hopefully we will see a big 2011 with his next single “Sofi Needs A Ladder” making it’s way back across the pond. Rob Swire makes this song what it is with his amazing vocal performance, and the song also has a pretty cool video as well. 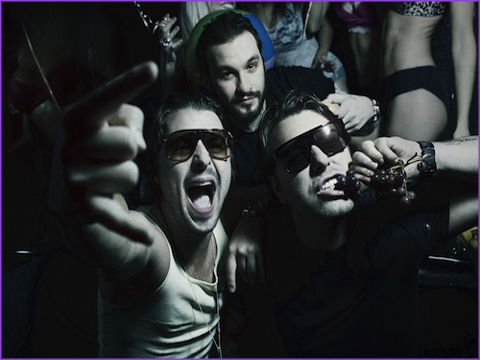 1. “One” – Swedish House Mafia: Appropriately named, as if SHM had predicted where this song would fall on my Top 20 list, “One” is the one and only song worthy of this spot. As I mentioned in the “Miami 2 Ibiza” blurb, the Swedish House Mafia is made up of the GIANTS of the Electronic Music world, and what do you get when you put three musical geniuses in the same room but a master piece. Reaching number 6 on the US and number 2 on the UK Dance Charts, this song is truly THE Club Banger. If you haven’t heard it, you are living under a rock. As far as Electro House music goes, this song came out almost too soon, and literally took the genre by storm. Hope to get a lot more from SHM this year, but they look like they need a rest.

The Official “One” music video: