Review: Inside My Chemical Romances Plan To Destroy Miley Cyrus

My Chemical Romance are known for doing stuff colossal. On their fourth album “Danger Days: The Fabulous Lives of the Killjoys” the musical vastness that the band has been tinkering with for years now has risen to a new level and shines through in vivid colors. Thankfully gone are the melancholy mantras of “The Black Parade” where singer Gerad Way bleached his hair white and marched around claiming to be the “Savior for the damned” or whatever it was that Rockstars believe about themselves. Packed far away in some Hard Rock Café vault are the insipid, gray army suits worn for somber expression of the songs of that era of MCR and for the public’s sake, the moths will love the taste.

Everything about “Danger Days” feels like a throwback to the monster success of “Three Cheers for Sweet Revenge,” the pacing, the fast sing alongs and the creative attitude that earlier this year, the band so desperately, wanted to suppress, but thankfully, didn’t. Being over the top and almost like a musical carnival is what MCR does, for them to put out a record as they had publicly planned, that would sound more like Iggy and the Stooges or the Ramones, would have been a disservice to the legacy that My Chemical Romance is, vs. perceived to be. They’re pop punk mavens who excessively love Queen and Radiohead, not street punks who cite The Unseen or Global Threat as their influences, so why quell that? MCR was smart enough to realize that who they are, is more salient than trying to be something they are obviously not. 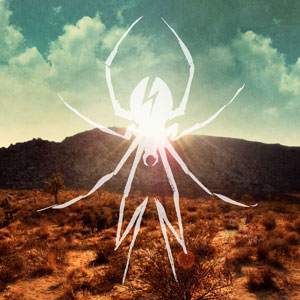 There’s a certain amount of “Fuck You” that’s sprinkled throughout, and that passion puts the album over the top and vastly adds so much to the listening experience. On the Track “Vampire Money” Way and Co. exclaim, without mincing words, their absolute disdain for bands jockeying for placement on the “Twilight” soundtracks. It’s impressive because it’s loud, and brash and unapologetic. It’s what a middle finger to the corporate Rockstars should be. The albums opener, “Sing” features lush synth melodies and vocals that call to Tool or Muse than anything of the current pop punk cannon, which is gratifying because it shows that MCR are capable of continuing their desire to expand what people think about what labels and genres actually are.

The album isn’t half filler and half decent tracks. It’s a cognitive story that flows into one another much like Shooter Jennings masterpiece “Black Ribbons” did, earlier this year. Pulling off a concept record is never easy, but to MCR’s credit, they do it exceptionally well, considering this is their 4th record and all include such had a lingering theme throughout, as well. There’s a guy called “Dr. Death” who acts as a radio announcer who is the voice of presence and as the music flows, his voice, is important to the listener who’s paying attention to what the record is trying to get across.

“The Kids from Yesterday” is a anomalous, ethereal track that adds a certain volume to the feeling of the piece as a whole and is a pleasant change of pace from what the current culture of music is right now. “S/c/a/r/e/c/r/o/w” is a more sophisticated version of the classic MCR sound, but built more like men who are in their 30’s instead of the 20 something’s who started the band years ago. The greatest strength of the record is that it doesn’t fall short. It exceeds in what its purpose is: to create an impression of another world filled with music that is creative and allows the listener a little escapism.

“Danger Days” is fun and the world is better off that MCR will be cranking out the radio-friendly hits that will be taking away spins from the likes of Will Smith’s kid, and throwing dirt on the grave of Miley Cyrus’s career. Hey, Miley is 18 now, Playboy is finally an option once she’s C list and I bet My Chemical Romance had it planned all along. I mean they are calling themselves “The Killjoys” on this record.