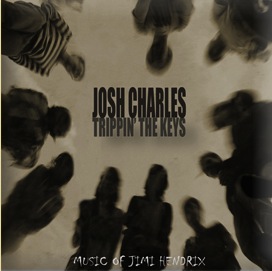 Covering someone like Jimi Hendrix isn’t just hard, it’s next to impossible. The average dude can’t just pick up a guitar and start picking away at “Machine Gun” like it was a Nirvana riff. The level of skill and passion in any Hendrix riff is prevalent at all times, and if someone in the local music shop is ripping a killer version of “Cross Town Traffic” out, chances are they are incredibly talented.

Josh Charles, the piano virtuoso of “Healing Time” and “Love, Work and Money” fame is one of those guys in the music shop and on his new E.P. “Trippin’ the Keys,” Charles attempts to channel his own inner Hendrix by covering four of the legend’s hits.

Choosing a set of Herculean musical foes, Charles breaks down the intensity and beauty of Hendrix, note for note on the keys of his piano, and the results are impressive.

The vibe of “Trippin’ the Keys” isn’t cheap or hokey, which, a lot of artists fall into when trying to remain true their distinctive sound while showing love of the song. Lucky for Charles, he doesn’t do that. His portrayal of “Voodoo Chile” isn’t a willy nilly collection of musical jackoffery like most would assume. Instead, the sound is enormous and complex, almost played like the Band of Gypsy’s era Hendrix approached his own songs, but with a piano.

“Hey Joe” is bluesy and downright rude, the perfect delivery to a song with such a dark undercurrent. The fire behind Charles’ fingers draws up images of Hendrix blasting away on his Fender, but some of the moments become Charles own due to his ruthlessness and willingness to take the rhythms and sly grooves to a place that only drunken bar room pianists might have considered, but not actually had the balls to do.

The real triumph of the record is “Little Wing.” Known as one of the definite masterpieces within the Hendrix cannon, “Little Wing” has everything from soaring melodies to slow hand, mouth watering, highs and lows. Charles stalks the keyboard like a hungry cheetah that smells blood in the air. The crushing speed and chord changes created defy standard piano skill. A true master in the style of Thelonious Monk or Fats Waller, Josh Charles took a risk by releasing an E.P. of songs adored by generations and with his masterly risk, the reward paid off in spades. Anyone who is an audiophile or lover of pure musical talent will be happy to take up the offer to download it for free off his site.