Mixing pop punk and hardcore is a tight rope to walk. Fans on both sides of the respective styles of music sit like hungry jackals and wait for the first sign of weakness and prepare the attack when the artist falls. Lucky for A Day to Remember, they streamline both styles in exemplary fashion and do so with exceptional results. “What Separates Me From You” is the band’s new album and the overall impression is one that hasn’t been heard since fellow pop punk-hardcore kids turned millionaires New Found Glory were killing it a decade before, mixing titanic sing alongs with some furious mosh riffs.

“What Separates Me From You” is a fun album with curve ball hooks that Tim Lincecum would be proud of. Every song is one demonstration of mastering the radio-friendly chorus that lure in the girls while keeping the rage in check that will allow their boyfriends, or distance ridden stalkers occupied in the back while slam dancing away. 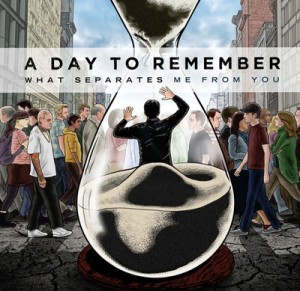 What’s appealing about “What Separates Me From You” is A Day to Remember’s skill at blending pissed off moment’s ala-Scott Vogel in his prime with Buried Alive one moment while going total Fall Out Boy the next. “You Be Tails, I’ll be Sonic” is a tried and true hardcore song. The opening riff is devastating, but then, the whole sense of what the band is capable of goes entirely left field and makes you want to sing along and beat your steering wheel like it was the last song on earth you had ever had the pleasure of hearing.

There’s a lot of beauty to the music with songs like “If I Leave” but then, when this record kills, it fucking slays. “2nd Sucks” is absolutely crushing and could give any strict hardcore band a run for it’s money any day of the week. Bring Me the Horizon, watch out because if you let your guard down for a second, these dudes will be on your heels.

One of the more notable features about the record is A Day to Remember doesn’t follow directions well, and that suits the overall vibe of the record perfectly. The songs are structured in pop punk with hardcore overlays in every direction, but also with a sense of chaos. The beauty of what “What Separates Me From You” is that anyone who loves music can usually air drum along to any record and figure out the nuances of the band within a few tracks. This album doesn’t do that. There are a few moments where the listener is genuinely surprised, and that’s a glorious thing.

A Day to Remember have written a completely solid album and Victory Records should be proud as hell of this one and call it one of their best of the year.

2nd Sucks
You Be Tails, I’ll be Sonic
Sticks and Bricks
This the House That Doubt Built