Review: Vocals Aside, A Killer Album From Former System Of A Down Lead Singer 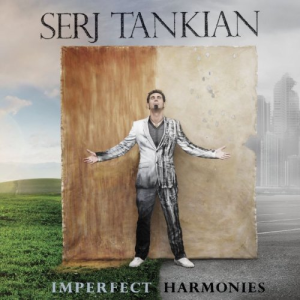 There are two kinds of people: those who enjoy Serj Tankian’s vocal style and those who do not. I am in the latter. I do not like System of a Down (SOAD), and I thoroughly loathe the way he sings. Keeping all of this information in mind, I will admit, his new album “Imperfect Harmonies” is quite fascinating, beyond the vocals. Setting aside my distaste for Tankian’s delivery, the core ideas of the piece are insightful, engaging songs that showcase a lot of talent as a musician.

Going into this review, I was expecting ham-fisted SOAD knockoffs with some acoustic guitars or over extravagant faux Nine Inch Nails programmed trash. Instead, the songs are claustrophobic whispers that feature Beatle-like guitar riffs and sublime vocal harmonies that climb the staircase of melody. The album shows a lot of weight and is sonically pleasing to the ear, when you can tune out the way he sings.

“Disowned Inc.” starts off so formidable, in a cooky Mr. Bungle sense and then, Serj busts in with “ I can feellll youuu farr away” and I had to skip ahead. There are small snippets of classical, steampunk inspired jazz and everything in between. Some of the beats aren’t far off from classic Bjork or A Whisper in the noise.

The album is enjoyable, musically speaking, but the vocals just freaking kill me. I don’t hate Serj Tankian, which is a surprise, considering I hate everything.

If you are bolder with your tastes than I, apparently am, I wouldn’t tell you to not buy this record. I love Thom Yorke and I loved his album “The Eraser”, and honestly, Serj Tankian isn’t too far off that mark, it’s just a sound I cannot for the life of me, find a moment to enjoy.