Hey TAM readers, it’s been a really long time since I’ve had a piece of my mind on the feed here, but I’m back from my hectic summer and ready to bring you my opinions and reviews, so I’ll spare you the details as to why I’ve been MIA and get right to it. I’m re-emerging with an exciting review of Brandon Flowers’ debut solo project “Flamingo” released September 14th. 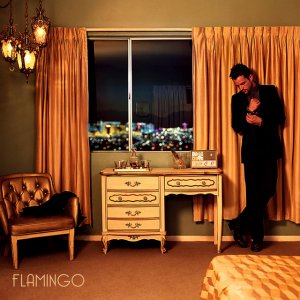 Stemming from “a little time off” as The Killers call it, working for six straight years non-stop, their charismatic frontman has released a solo project entitled “Flamingo.” Being a massive fan of The Killers, I dove into this album with high expectations, but I also new to expect Flowers voice and not The Killers. Drawing from 80’s new wave/alt./ synth pop artists such as The Smiths and Morrissey, Depeche Mode, The Cars, Oasis, and the Pet Shop Boys, Flowers’ album, for the most part, strays away from the traditional Killers sound (because most Killers songs are written by the band as a whole) and brings to the table something fresh and original. “Crossfire,” the album’s first single hit the airwaves of BBC Radio 1 on June 14, 2010, which was befitting because Flowers considers himself an Anglophile (one who is obsessed with all things British). This being my personal favorite from the album, it is one of the few songs that you could picture on a Killers album, the other being the second single “Only the Young” (which features Ronnie Vannucci on Drums), but with an overwhelming acoustic guitar part, which is rare for The Killers, there is still noticeable separation from sound to sound. “Magdalena”, the third song I thoroughly enjoy sports a fast paced bass line and a chilling key change about half way through. Along with his musical influences, Flowers draws heavily on his experience growing up in “Welcome to Fabulous Las Vegas” (the opening track), and references the surrounding desert and growing up on the streets of Sin City. Flowers uses several new sounds including slide guitar, saloon piano, and a slew of electronic features including a ton of synth work. Along with new instruments, Flowers also went through the process of recruiting a new band to record the album. Using a bunch of different artists including Benji Lysaght (Guitar), Victor Indrizzo (Drums), Herschel Gaer (Bass), there isnt really a set band for the album, but rather a bunch of musicians who Flowers hand picked. “Flamingo” also features famed producers Brendan O’Brien (Bruce Springsteen, U2, Pearl Jam) and Stuart Price (The Killers, Madonna, Seal, Pet Shot Boys). Having purchased the “Deluxe Edition” I got another one of my favorites “I Came Here to Get Over You” which is essentially a Cars song with a Flowers twist. All in all, putting my bias towards all things Killers aside, I’d give “Flamingo,” which is named after the street he grew up on off the Vegas ADOBE CS6 MASTER COLLECTION strip, a solid 7 out of 10. The album has good flow and continuity from song to song, some new and original sounds being mixed with the classically unique voice of Flowers, but lacks potential hit singles. I am of the opinion that just because it is not on the radio doesn’t make it bad, but it is a huge factor, and unlike a lot of today’s mainstream artists, Flowers may not care about what makes it to the radio, but record companies usually do. I think that Flowers went for the complete album that maintains a story and focused less on having hit singles. If you notice, only the two songs that have any hint of Killers in them are the radio played singles, thus proving my point that Flowers solo career is focused on making good music from start to finish not just two or three awesome songs. If you are a Killers fan, you probably already have this album, but if you’re not or have never even heard of The Killers, that alone is a good reason to get it. It truly is a good album, and is very worth listening to, but if you listen to “Flamingo” and then go and listen to “Sam’s Town,” (The Killers second album) your mind will be blown.