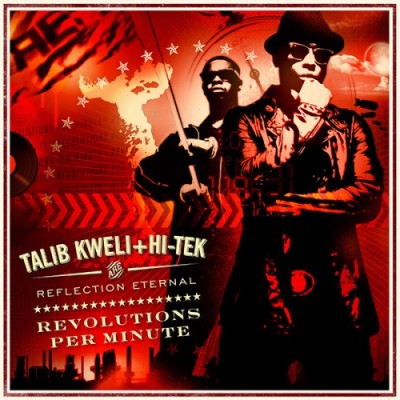 Are you comfortable? Better question: Are you ready to listen? On “Revolutions Per Minute,” the second album from hip hop duo Reflection Eternal, Talib Kweli and DJ Hi-Tek, are delivering the finest, smoothest, lyrics and beats you’ll listen to all year.

As on previous albums, Kweli avoids the repetitive beats and empty words of modern rap music. On tracks like “Got Work” and “Ends,” he instead speaks about the pitfalls of pursuing fame and money. The effect of such tracks is to make the listener wary of pursuing a life in entertainment; a sentiment that is further realized on the track “In the Red,” which names star after star that has ended up worse off, in spite of their status as famous. While the message could quickly become dismal, Kweli’s words appear to simply be advising against the love of money being ones only interest in pursuing their dreams.

Always more aware of where he came from than his current status, Kweli embraces that history and continues to be politically driven through his music. He vibes to Hi-Tek’s beats to speak about the current economic climate and oil crisis on “Black Gold” and, along with Bun B, takes jabs at the health care system and President Obama on “Strangers (Paranoid),” which laments about tax bailouts for big corporations and the depression going on in low-income America.

However, like a prophet that is hopeful of what the future can bring, Kweli does not deliver the truth about the bad without a message to strive for the betterment of self. On “City Playground,” Kweli ends by telling the listener to reach their full potential and stop being afraid to achieve.

Many of the tracks on “Revolutions” that focus on his abilities as a rapper, such as “Back Again” and “Get Loose,” talk about not being your average rapper making ring tone singles. His flow and content combine with Hi-Tek’s beats to leave little room, if any, to argue against his self-proclamations. However, a couple of catchy (and, if nothing else, more accessible) tunes work their way onto the album. “Midnight Hour” featuring Estelle, will remind the listener of a time when Motown love songs ruled the airwaves, while “Get Loose” is the story of a night of picking up women at the club.

Both tracks avoid the jaded opinion that a famous rapper can get any girl he wants and genuinely talk about desiring a woman. In fact, both tracks are prime examples of Reflection Eternal’s dedication to a sound that does not over compensate for a lack of content and instead strives to compliment the words being said. Hopefully, finally, rappers will start following Kweli and Hi-Tek’s example and start producing something that will last, instead of creating summer singles.