A Little Taste of Bamboozle at the Bar 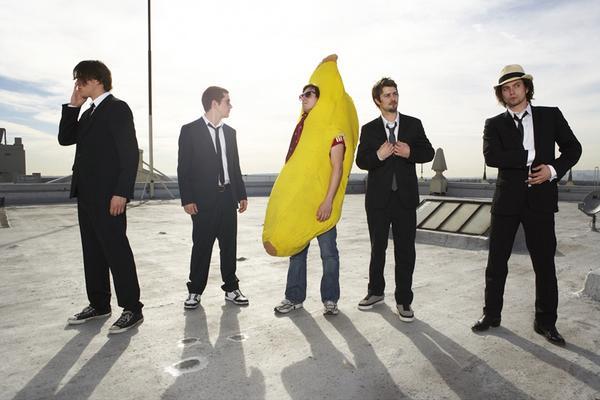 I contemplated going to Bamboozle in East Rutherford, NJ this year, but my pending bills and car payment convinced me to keep my regular Saturday night bartending shift instead.  After all, who wanted to watch Ke$ha (basically) headline what used to be a killer rock festival. But, the fact that she sums up everything that ‘s wrong with music today is another article altogether.

So, anyway, it was a pretty routine Saturday night, slower than usual and not exciting in the least. Around midnight, two guys walked in, one sporting a Mohawk, the other a headband and long-ish hair, and ordered Bud Light drafts and shot of Jameson each. My type of guys.

When I brought over their drinks I noticed that they were wearing passes from Bamboozle, so I interrogated further and found out they had actually played the Skate & Surf Stage (in case you don’t know, it’s one of the main stages.) They were two members of 100 Monkeys and though they couldn’t quite put a label on their sound, it is something like “eclectic, rock funk.”

Although I felt terrible that my music knowledge was lacking in the “Knowing Who the Band You’re Meeting Is Department” these two guys were awesome. We had a great conversation where I heard all about their show that afternoon, their tour and the other members of their band including “Uncle Larry,” who for the record does NOT like to be called a “Pimp.”

They left my bar at closing in an effort to see what else was going on before they started their long drive across the country, back to L.A. Luckily, I did score a CD first though.

Since then, I have not been able to stop listening to 100 Monkeys. They really are a kick-ass band. Their music has a totally different sound that includes hand drums, trumpets and flutes behind deep crooning vocals ala Jim Morrison and Iggy Pop. The band tells me that they switch instruments throughout the show and that they make up songs on the spot based on fan suggestions. I don’t know about you, but to me, that just makes them even cooler.

The four guys: Jerad, Jackson, Ben, and Uncle Larry met in L.A. a few years ago and started the band as an improv group. Their name, 100 Monkeys, stems from the Hundredth Monkey Experiment, where the idea of collective consciousness was proved by a group of monkeys who taught themselves how to wash sweet potatoes to make them taste better. And apparently, Jackson Rathbone is also better known to the “Twilight” community as Jasper Cullen. He played the vampire in both movies and the day after I met them, Rolling Stone named them one of the “Top Five Break Out Bands from Bamboozle 2010.” Alright guys.

Sooo… if you are like me and have not heard of 100 Monkeys until now definitely check them out. They’re smart, unpredictable, and most of all…fun.  Their newest album, “Grape,” is out now.

Here’s a video of them playing “Keep Awake” at Bamboozle: