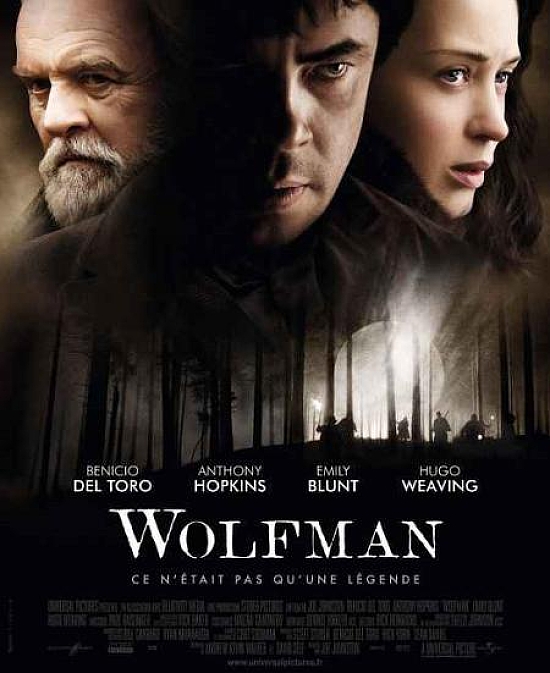 Yesterday I went to see a personally much anticipated movie, “The Wolfman“. Let’s just say, I’m upset. (Be ware, some things in this review could possibly be considered spoilers). The movie begins with a thespian named Lawrence Talbot (Benicio Del Toro), starring in a production of Hamlet in London,receiving news that his brother has been missing for a few weeks. He returns to his fathers estate to find that his brother has been found mutilated by either a feral beast or a “lunatic”. This whole story line happens in a matter of minutes in the beginning of the movie.

Which brings me to why this movie was so bad. Don’t get me wrong the make up was of the highest caliber and the gore and CGI effects where among the best, but that is generally not what I go to the movies for, especially a remake of a classic such as “The Wolfman.” What I want to see in a movie like this is an evolving story line with twists and unexpected plot lines, but instead, all I got was a fast paced, action based, smash cut featuring, flash backing piece of shit that had a story that was completely predictable to the very last detail (keep in mind that I’ve never seen the original, so it wasn’t predictable in the sense that it was the same as the original).

To add to this it had the corniest of scripts and acting, which was surprising with such an all-star cast. Lastly, throughout the movie, if you haven’t seen it yet, there is a stupid dog that lives in the haunted mansion that is Talbot’s house, and whenever there is a really suspenseful moment in the house that you are about to shit your pants because of, don’t worry, it’s just the stupid dog.

Like I said, the effects were really cool, especially the transformation from man to werewolf, but the story line was just really lacking, as was the acting. The filmography wasn’t there either. On several occasions, to show the passing of time to the next full moon, the camera just shows the moon growing with clouds zooming by it, which was just corny, for lack of a better word.

As I am writing this review, I am being criticized for my point of view, by my room mate who is a huge fan of the original Universal monster movies, and he is telling me that he is going to see “The Wolfman” to see people get ripped to shreads, not for good acting and a good story line, so perhaps that’s what the movie was supposed to be like, but for my money, I want to see more than gore and hairy beasts terrorizing a creepy forest world.