“A Hiatus Is Forever Until You Get Lonely or Old.” The Future of Fall Out Boy 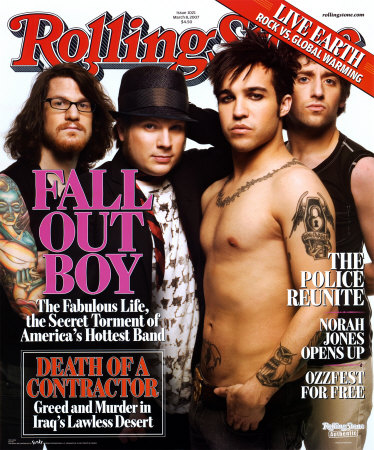 At the peak of their success, Fall Out Boy were the #1 alternative band in the country.

“I’m not in Fall Out Boy right now…Whether we play again or not, I don’t know,” singer Patrick Stump told Spin magazine on Tuesday. ”I quit too,” Andy Hurley followed up via Twitter. Hurley later confirmed that he didn’t really quit and that he doesn’t really know what the status of the band is.

Basically what it comes down to is that Fall Out Boy is taking an indefinite hiatus before coming back to reevaluate the situation in a few years. While most of the band seems hopeful that they will get over the bullshit and play together again, all of the reports started after Pete Wentz took to his Twitter and blog on Monday night.

“A hiatus is forever until you get lonely or old. I don’t plan on either. I can’t imagine playing in Fall Out Boy again…as a band we grew apart,” and “letting go of this giant part of my life has been hard.”

As an outsider looking in (and without the bias of being a hardcore fan) this doesn’t come as a total shock.When Fall Out Boy first came on the scene, they were making great music and they had an original setup in the sense that their lead singer (Stump) wrote and organized all of the music, while Pete Wentz, the band’s bassist, wrote the lyrics and served as the band’s frontman. They put out a few good albums, (“Take This To Your Grave” and “From Under The Cork Tree” were the best) but as they rose to stardom, it seems it became more about the fame to Wentz and less about the music in the last few years.

If I were Patrick, Andy and Joe, I would be tired of living in Wentz’s shadow too. Now mind you, this is only speculation and my opinion on the matter, and the members of Fall Out Boy don’t even seem to know what’s really going on. But to further my point, all of the members have gone their separate ways and they are all working on their own projects.

In his downtime, Pete Wentz recorded a song for the Alice in Wonderland soundtrack with Mark Hoppus from Blink182 (Blink182 is another band who recently went through a public breakup then make up situation). Guitarist Joe Trohman and drummer Andy Hurley formed The Damned Things with members of Anthrax. Hurley also formed The Burning Empires. Stump is hard at work on a solo album. I just hope he’s not too shy this time around to head up his own project. So, while the future of Fall Out Boy is still unknown, the members of Fall Out Boy will still be making music, and according to Hurley, “I’ll still be touring the world, somehow, someway.”