Sample the Alice in Wonderland Before Its’ Release on March 3rd! 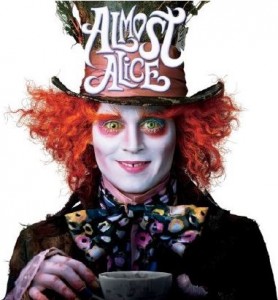 For those of you who can’t wait for Tim Burton’s Alice in Wonderland to hit the big screen on March 5th, Disney is offering up a preview of the movie’s trippy soundtrack here.

My best guess is that Avril Lavigne’s song “Alice” will be the movie’s single, as it is the only song that plays in full. All of the other songs are samples. However, don’t expect the “Skater Boi” singing Avril that we’ve all come to be familiar with. Her voice is strong and has obviously developed over the past few years, and the song is as ominous as Burton’s movie direction.
In fact, if the soundtrack tells us anything about this Alice remake, the movie is going to be spectacularly Burton. Dark, creepy, and weird with his signature visual style, but hopefully, not a complete disaster like Charlie and the Chocolate Factory was. It seems that Alice in Wonderland is a story that Tim Burton was born to bring to life, and I’m honestly surprised that he hasn’t made this movie sooner. But I guess we will all see what he has in store for us on March 5th.

As for the soundtrack, I’m a big fan. You can almost imagine the entire storyline as you listen to the album, yet all of the songs can be listened to separately from Alice in Wonderland, and still be good songs. And, how could I hate it? There are a ton of awesome bands involved and the music is really good. Every song on the album intrigues and they made me want to go back and listen to them again, despite the fact that they were samples.

Pay close attention to the All-American Rejects song “The Poison,” All Time Low’s “Painting Flowers,” Plain White T’s “Welcome to Mystery,” and Motion City Soundtrack’s “Always Running Out of Time.” The Alice in Wonderland Soundtrack drops two days before the movie, on March 3rd. Until then here’s the track list: