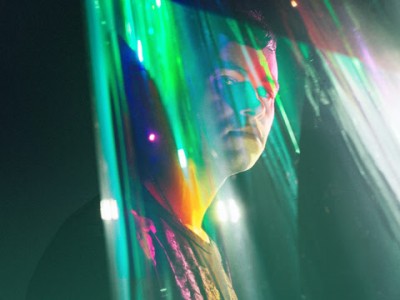 After a two-and-a-half year hiatus Rustie is returning to the fray with his second album Green Language, a follow up to 2011′s critically-lauded Glass Swords.

Relocating from London back to his hometown of Glasgow, Rustie chose only to work with those he had a personal or musical connection with, including Danny Brown, Numbers’ Redinho, and UK grime legend D Double E. The result is a more personal and mature record than his debut, one that draws on a range of  genres that include shoe gaze, grime, trance and Dirty South hip hop.

Despite the disparate influences, they’re all funneled through Rustie’s single-minded vision of teasing genuine emotion out of his larger-than-life beats. Case in point: the album’s first single “Raptor,” which combines snatches of rave, and trap and hardstyle to recreate the euphoria the shy producer experienced when first attending raves as a teen.

“A big part of music for me is saying things that you can’t say with words,” he says.

That goal extends to the album’s title; Green Language, a nickname for “language of the birds” is a term considered the key to perfect knowledge.

“It’s a language that’s non-dualistic, that speaks to you directly to your emotions without the mind interfering with the message. And music is like that for me.”

Rustie will also be hitting the road for July and August, with stops at Atlanta, New York and Hard Fest in California. Listen to “Raptor” below and view the list of dates HERE.