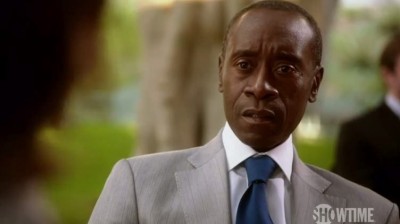 After ending on a somewhat hopeful note last week, House of Lies season three finale “Joshua,” lowers the hammer on our anti-hero both personally and professionally.

House of Lies, while initially marketed as a no-holds-barred satire of the jerk-offs that populate America’s one percent and the ruthless management consultants who hate/tolerate them (who are of course our main foursome), but has grown to encompass so much more over three seasons. Office politics, sexual harassment, family, friendship, gender, race, sexuality and class have bubbled up into the show’s storylines. But its bedrock, a foundation as reliable as the parade of opportunistic scumbags who make up the clientele or a “shut the fuck up Doug,” is the relationship between Marty and Jeannie.

Equal parts teacher/student, brother/sister, daughter/father and boyfriend/girlfriend, these two’s connection has always been layered and complicated, and each season has charted the messy, shifting dynamics of their bond, with the finale serving as a kind of mission statement for what they would endure the next time we entered their world.

Season one finale “The Mayan Apocalypse,” saw the two get shit-faced after Jeannie blew up her life to save the firm, irrevocably changing her status from Marty’s Girl Friday to potential girlfriend. Of course, neither of these two emotionally-damaged people wanted to admit something as terrifying and potentially gratifying as romantic feelings, so they spent the following year awkwardly dancing around each other. All the while memories of their blackout adventure came back to Jeannie–one of which involved her uttering  the L word. She finally got the nerve to say it sober in “Til Death Do Us Part,” season two’s finale, but was met with scoff and snark from Marty, who, consumed by the dream of starting Kahn and Associates, lost out on having her as either a girlfriend or co-worker.

This season began with Jeannie and Marty working at different firms, but working in collusion, playing two organic food companies against each other for mutual ill-gotten gain (which came back to bite them in the ass–more on that in a minute). Jeannie came to the K&A fold, but things had again shifted; like Peggy Olsen’s short stint as creative director at CGC, Jeannie got to be the boss at Galweather, and once you’ve been a boss, you can never truly go back to being an underling. So it came as little surprise Jeannie and Marty butted heads again and again, as she questioned his every decision, their battles given an extra jolt by the ever present sexual tension.

In “Joshua,” all of this came to a head in ways beautiful and tragic. After at last consummating their attraction and going “legit” as a couple with plans for a real date, Marty and Jeannie are finally in a good place, acting all lovey dovey as Marty makes breakfast. They, and we, get a glimpse who they could be, the person they could become simply by opening up to another human being. Then it is all snatched out from under them. Jeannie’s DOJ contact Samantha, decides to launch an FBI investigation into the firm despite Jeannie changing her mind about turning over the Dolla Hyde books.

From there it’s all downhill; clients jump ship as the news spreads, and while Marty manages to talk one off the plank with some David Copperfield level bullshit, it’s a hollow victory. The gig is up, and even douchebags like the Dushkin twins know it, making a cameo appearance to publicly fire Marty. Later, Doug reveals the FBI didn’t find any red flags on Dolla Hyde, but on Colossal Foods and Free Range. Samantha manages to save Jeannie’s ass, but it’s off to the precinct for Marty. With a prosecution itching to put him away, he must walk away from the firm he created, leaving Jeannie in charge. True to form, he sees this all as an elaborate plot to take over Kahn and Associates.

It’s not true, but how could he see it as anything else? Jeannie has been pushing for partner status since she came aboard, and has shown was she willing to do almost anything and use anyone (Julianne, Benita, Lucas) at her disposal to get what she wants. So why not jump into bed and use her DOJ contact to ensure her legal safety? The last scene is a role reversal of “Til Death Do Us Part”: Marty out on a limb, his vulnerability on full display, asking Jeannie what she wants. And Jeannie tongue-tied, not giving her answer–a quiet, whispered, “you”–until he’s long gone. What happens next is anyone’s guess. Will Marty go to jail? And if he does beat the charge, what will he do for work? I’m not a consultant guru, but I’m pretty sure being caught playing your clients against one another to line your own pockets makes your name mud in the industry. And who is Marty Kahn if he’s not working, scheming, plotting his next move?

Maybe Marty doesn’t want to think about that either. The episode opens with the shot of a tree, seemingly somewhere out in the desert. And that’s also where it ends, as Marty sheds his suit, shirt and tie and sits on a rock, staring up into the California sky. His future is as unstable as ever; but for now, he seems to be at peace, taking some comfort from being surrounded by something bigger than himself.

—Roscoe decided to give Lex another chance, and Lex once again showed his ass, (possibly) outing Roscoe’s feelings for a friend before dumping all over everyone and storming off. Something tells me that’s the last we’ve seen of Lex. Later though, Roscoe puts the drama behind him by showing off his krumping skills for the kids, getting some family support from Marty, Jeremiah and Chantelle.

–Clyde didn’t have much to do, since his story arc pretty much wrapped last week, but Ben Schwartz always brings the snark, so hearing he and Marty trash Doug’s literary ambitions–particularly after Doug revealed angry e-mails that compared Marty to Stalin and labeled Jeannie Beannie a cum-guzzling backwater gutter slut–was good enough for me.

–Watching a tearful Jeannie say “I have…had something good going,” was heartbreaking. She already knew things are over with Marty the moment she saw FBI agents.