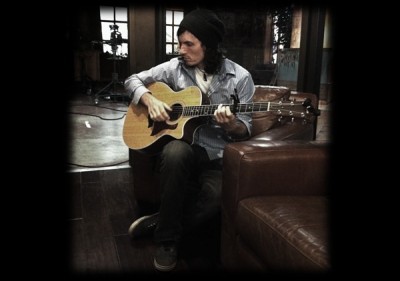 Hailing from Salt Lake City,  multi-instrumentalist Richard Tyler Epperson has been playing music for much of his life, becoming a bassist at age 12, teaching himself to play piano at 15 and playing in various bands through his late teens. By his mid-twenties however, Epperson decided to focus on more on his songwriting and crafting his own solo material.

The result was his 2013 debut Falling Between The Stars, written, produced and played entirely by Epperson. After playing shows around Utah, Epperson returned to the studio to record Hourglass. Slated for release in April, the album’s marriage of personal, heartfelt lyrics with a sonic palette of acoustic guitars, rock flourishes, and a touch of electronica is reminiscent of fellow pop wordsmiths John Mayer and Jason Mraz.

He channels the latter on the album’s title track. With its bright, sunny guitars and Epperson’s inviting vocals, the song is as refreshing as a summer breeze. However, while “Hourglass,” may sound carefree, the lyrics, like much of the album’s songs, focus on the fleeting nature of time.

“Listening back to the songs, I started to realize a lot of them had lines or hidden messages about how fast time goes by and about trying to find happiness in the short time we have. Those thoughts inspired the song ‘Hourglass’ and the name seemed to be fitting for me at this point in my life. Time goes by so fast and we all get caught up in daily life stresses that take us away from our dreams and the things we care about. The more I grow up and the older I get, the more potent that thought gets. If you stop to think about it, the hourglass is always running and it’s important to make sure you’re living life the way you want to be living it,” says Richard.

Listen to Hourglass in its entirety HERE.