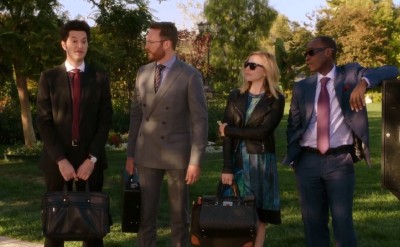 After the fireworks of last week’s “Middlegame,” in which Marty and Dre’s scheme to push Lucas out of Dolla Hyde was exposed (which led to Lucas exposing his fist to Dre’s face), this week’s episode “Pushback,” deals with the fallout, while further complicating things between Marty and Jeannie.

To say Dre and Lucas’ partnership is over is an understatement. There Dre is, video conferencing with Marty while random employees are taking artwork, furniture and trees (not the trees!) out of the office, per permission from Lucas. He’s also fired multiple senior employees and stopped the big checks from going out–and since he and Dre have to co-sign on everything to keep the wheels turning, the company is falling apart. Dre is having a meltdown at the thought of his life falling apart in front of his eyes, though Marty talks him off the ledge enough to get him out of the office.

Marty tells the Pod they’re sticking to the original plan of pushing Lucas out, but Jeannie Beanie has other ideas. She asked Doug to run numbers to see who’d Dolla Hyde would fare better under, and came up with no any noticeable difference. So why, she questions, should Lucas, an equal partner, be pushed when there’s no financial rewards to be reaped from doing so. Marty brings up the fact the guy is a huge liability, and as he’s always willing to “go there,” trots out that Jeannie’s defense of Lucas may be coming from her own hurt feelings over not being  an equal partner at Kahn and Associates.

Ever since they strolled onto the scene in “The Associates,” the show has not-so-subtly drawn parallels between Dre and Lucas’ disintegrating personal and professional relationship and the continued tension and sniping between Marty and Jeannie. Marty blowing off Jeannie’s confession of love last season is a huge part of their rift; but his inability to admit just how valuable she is to his firm–to give her her props, if you will—seems to really be driving her crazy. After all, this is the same woman who told a wide-eyed Katelyn she would read and study office documents while her boyfriend went down on her. Having to deal with Marty’s commitment phobias is one thing. But not being acknowledged for her work? It must be maddening.

One they agree on a plan–or in this case Marty vetoes all other plans–Marty, Clyde, Doug and Jeannie head to Lucas’ mega mansion, complete with a fleet of cars, a fountain full of catfish and other hood rich trinkets. A small complaint: it’s already been well-established Lucas is the ratchet yin to Dre’s bougie yang. We really didn’t (or at least I didn’t) need a detailed show and tell of just how hood rich Lucas is. But Don Cheadle sells these Zack Morris moments so well that it is, as I said, a tiny complaint.

Anyway, Lucas knows they’ve come to kiss the ring and proceeds to screw with them mercilessly, trotting his personal clothing “models” and laughing off Marty’s offer of a $50 million buyout. Marty’s threat to pull the books that show Dolla Hyde’s illegal origins is met with excitement from the crew, who talk about which flavors of ice cream sandwiches are now available prison. Tough crowd. Things go from bad to nuclear when Marty says since Lucas paid him, he’ll just talk to feds and rat him out to all his former drug connections. And, well let’s just say Lucas didn’t take that well.

As the rest of the crew leaves in defeat, Jeannie makes an about face to the mansion and straight into a makeout session with Lucas in his pool. True to form, she’s dishing out hard truths like appetizers, telling him Dre doesn’t care about him, their partnership/friendship is done, and to take the money.

“My father died on Tuesday. The funeral is tomorrow in the shit town where I grew up. But I’ll be here, at my desk, making money and taking care of myself. Because unlike you, I learned very early on that no one is on my side but me.” Damn. Granted, her words would pack more punch if we’d heard Jeannie refer to her father or talk to her basket case of mother recently. But the previous seasons, the first one in particular, have done a good enough job of establishing Jeannie’s daddy issues that her reveal rings true. It also brings her attraction with Lucas into sharper focus. Yes, the guy’s charismatic (for all his douchebaggery), but he’s also been, and continues to be, the scrappy underdog, much like Jeanne Beanie herself. Lucas decides to take a buyout for $150 million and royalties. Only downside? Dre can’t afford that. Which puts Marty back at the mercy of Lucas. Checkmate Jeannie.

The other major story was Roscoe and Lex’s relationship. As Marty looks on at them, it’s clear Lex is kind of a jerk, dismissive and controlling, and that Roscoe is losing his identity. Marty tells Roscoe as much–albeit with trademark Kahn snarkiness–and the two fight, with Roscoe storming out. Jeremiah reminds Marty of their past father-son battles, and assures him it’s all par for the course. Later though, Marty comes home to find Lex and Marty drunk, and puts the kibosh on them dating.

One happens next is the best, if most heartbreaking part of the episode: Marty orders Lex to get out of the car, but Roscoe tells him to turn his back while Lex changes into girl’s clothes. When he climbs out the car, he is no longer the cocky brat from earlier, but a shy, scared kid, shrinking away from Marty and Roscoe as he walks inside to face a father, who, judging from his emotionless demeanor, is not supportive. At home, he’s not even called Lex, but Michelle.

Once home, Roscoe puts him into bed and lays a pail beside him, warning him never to mix the good liquor with Hawaiian Punch ever again. Roscoe cops to instigating the drinking before vomiting all over his favorite Bottega hobo bag.

“Drinking is for boys with cheap purses,” Marty tells him, before turning out the lights to let him sleep the buzz off. For all his faults, Marty’s always given Roscoe the freedom to be himself, however uncomfortable or confusing it may have been to him personally. For right now at least, Marty seems to be at peace with who Roscoe is.