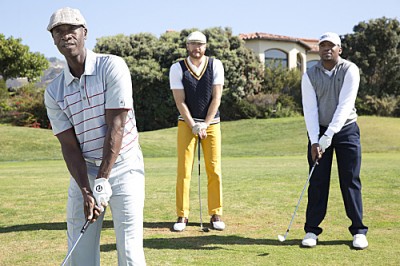 Families. You don’t pick them, and even when you do, whoever you’d surround yourself with would inevitably be a source of frustration, stress, worry and pain, and vice versa. Hopefully those who share your bloodline, or are your family by choice, also bring joy, happiness and of course love into your life as well. But you can’t have the positive without the negative. House Of Lies fifth episode of the third season, the curiously titled “Soldiers,” sees many characters try to define, struggling against or embrace the idea of family.

Marty is, you guessed it, struggling to embrace his family, though it’s hard to blame him. There he is on his balcony, trying to perfect his golf swing for his business meeting/man date with Dolla Hyde co-founder Dre (Mekhi Phifer) when he spies a random young thing in his shirt. Turns out Chantelle–that’s her name by the way, and who, as everyone reiterates, is too young even by Marty’s standards–is Jeremiah’s new “friend.”

A still-hobbling Monica stops by to pick up Roscoe, and even manages to dig herself out of her black hole of self-absorption for a nanosecond to express her disgust, before getting sucked back into the void.  Seeing his dad parade a conquest in front of everyone like an oversexed frat boy is an understandable reason to call his family a circus; lumping Roscoe and his potential beau Lex is not, and he and Roscoe get into a tiff after he rudely puts the kibosh on Lex from accompanying them to Dre’s house.

As Jeannie sardonically points out, Marty’s got something of a man crush on Dre. Why else would he clear his schedule to play golf and engage in a bit of ex-husband dickishness over Monica’s stabbing by an underling (who got canned by her firm to boot. Sorry girl)?  Part of that is because he admires and likely envies what Dre has; a family unit with an emotionally stable wife, no well-meaning but sometimes undermining (and horny) father and kids who don’t challenge his comfort level. This isn’t to say Roscoe is dating Lex, or dresses and behaves the way he does to upset Marty. He’s just being himself.  But it’s obvious that as much as Marty loves and defends Roscoe, part of him would breathe easier if his son were more conventional.

However, Dre’s got his only family issues to work out, the issue being business partner Lucas (T.I.). Last week’s “Associates” established these two are at odds as to how to take Dolla Hyde to the next level. Dre also made it clear he wanted Lucas out, so he and Marty do some master level-mental kung fu to convince Lucas creating a new sneaker–and separating it from the rest of the company to protect the IPO–is the best move. Marty warns Dre that pushing Lucas out of Dolla Hyde will likely destroy their friendship forever, but to Dre, the move is necessary. Lucas threatens the life he’s fought to build with his wife and  kids–his family (there’s that word again)–so he has to go.

Then there’s Doug. He’s not sure if he wants kids, so much so he’s, shall we say, holding back when he and Sarah have sex. She questions as to whether he’s faking an orgasm, but he lies and pretends everything’s fine. He even made his special climax noise!  Of course, he confesses all to a grossed out and disinterested Jeannie, telling her his “juices’ are so backed up it actually hurts. Jeannie suggests he rubs one out, which he holds off on until the conclusion of the gang’s golf trip, referring to the event as Mt. Vesuvius. And in an ultra gag moment, some his “ashes” manage to get on Marty after he puts his arm around him.  Oh Doug. After a verbal smack in the head from Clyde about how lucky he is to be uber smart, have a loving wife and great job, Doug gives in to the thought of having a baby.

Clyde continues to teeter at the brink of professional collapse, seeing a court appointed shrink as part of his drug sentence and generally flailing about. Desperate, he travels to a halfway house to find Marissa (Eliza Coupe, known as Jane to Happy Endings disciples), a former media maven whose family had her declared incompetent and got a conservatorship  over her because of her hard partying ways. He promises to get her company back and, after exchanging some kinky talk, she agrees. He gives the news to a skeptical Marty and Jeannie, who reluctantly give him his blessing to bring in the money. Kahn and Associates’ offices is also where Clyde not only smacks the aforementioned sense into Doug, but reveals his has no family, no life, outside of work.

“Marty’s fucked up like me. He gets it,” Clyde says, which Marty overhears. Marty scoffs at this, and while Clyde’s not completely right, he’s not totally off base either. He’s got Jeremiah and Roscoe, but little in the way of friends or other family he can stand (Malcolm anyone?). Clyde would find more of a kindred spirit in Jeannie, who rejects the whole notion of “being a milk machine for a bunch of teeny tiny assholes.” Jeannie’s dad took off, and as her and the Pod’s journey to her hometown in season one proved, her mom’s a whole other barrel of issues. So it makes sense she’ wouldn’t have the highest opinion of marriage and kids. Though if teasers for next week are to be believed, things between her and Marty may get complicated enough to throw a wrench in that mentality.