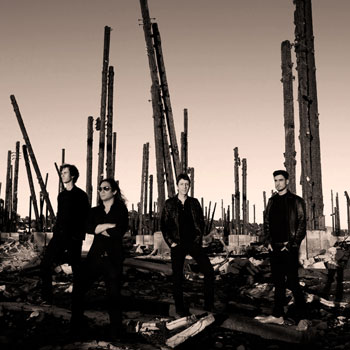 Influenced by the likes of 70′s era Bowie, The Clash, The Stooges and Interpol, San Francisco-based quartet Dangermaker’s  emotionally intense style of rock has created a bit of a buzz, leading to high-profile showcases at SXSW in Austin and CMJ.Even more than their musical  influences, the band’s passion comes a place of personal tragedy. During the first week of recording for Black Dream, their full-length debut album, lead singer Adam Burnett’s father passed away after a fatal accident. Driven by a newfound urgency and lust for life, Burnett and the rest of the group channeled the experience into their music, as evidenced by first single “Wake Up,” a dark, melodic cut bursting with bombastic energy (and a touch of reggae).

“Somebody’s Watching You,” takes things in a more electronic direction. Big, driving drums and lean, funk-infused stabs of  guitar give the track its groove, while the slightly foreboding synths and the paranoia-laced lyrics insures it’ll be one gloomy romp on the dancefloor.

Listen to “Wake Up” here. Black Dream comes out in March. To celebrate the album’s release, Dangermaker will be performing a show on March 13 at Bottom of The Hill in San Francisco. View the band’s other tour dates below.