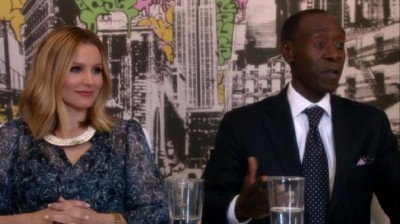 After burning Galweather to the ground and joining the new firm in last week’s “Boom,” Jeannie and Marty clash over what her–and by extension his–new role will be in the aptly titled “Associates.”

It becomes apparent things aren’t the same between the two the moment Jeannie, who’s all business, turns down an office tour to get up to speed on Dolla Hyde, a hip hip clothing line–think Roc-A-Fella, early Sean Jean–headed up by childhood friends Dre  (Mekhi Phifer) and Lucas (T.I.). The duo’s line is making big bucks, but they’re at odds as to how to take things to the next level. Dre, the business mind who wears cashmere sweaters and takes photos with President Obama, wants to go public and partner with an upscale retailer like Barneys, while Lucas, the creative one, packs heat (and a house arrest bracelet) and balks at the idea, being that “no one from the hood” shops there. To spell it out, Dre is sensible and focused, Lucas is the wild card.

“Lucas and I we made sense once,” Dre tells later tells Marty, and if it wasn’t obvious before, the show underlines it with big, neon highlighters: the breakdown of Dre and Lucas’s partnership is meant to mirror the breakdown of Marty and Jeannie’s. An argument between the two reveals they have very different ideas of Jeannie’s place at Kaan and Associates. As Jeannie correctly points out, Marty thought Jeannie would come back and be “his girl Friday,” working under him obediently and singing Daddy Warbuck’s praises for the big new office. Marty, who’s finally realized his dream of owning his own firm, views said firm as his baby. And he’s just fine with being a single parent thank you very much.

“I gave you what you wanted,” he says, before Jeannie lets this zinger rip. “You had torpedoed your very last relationship, outside of your family maybe, with someone that you gave a fuck about. And you saw that barely open window to your soul creaking shut…that’s why I’m here.” Damn. But she’s right, judging from the broken look on Marty’s face as he tries to give her the brush off. On one level, Jeannie’s anger is, as she says, about work, but it’s also Marty rejecting her last season. As I said last week, it’s inevitable all the will-they-or-won’t-they tension is going to come to a head, but hopefully the show teases out the current Marty vs. Jeannie dynamic a little longer–it’s a nice change of pace.

Meanwhile, Clyde is imploding. Trapped in the hell that is working for Monica and not able to go back to work for Marty, he’s strung out on pills and alcohol and missing work. A low point comes when a salesman and customer find him knocked out and naked in the back seat of a car and he’s arrested. In the middle of the night, he calls Marty to bail him out. On the drive home, he mentions Jeannie and Doug joining the new shop, and Marty, smelling an opportunist, shuts down the conversation, reminding him of his past betrayal.

Clyde starts to explain why he called Marty, saying he has no one in his life, but Marty, not wanting to deal with emotions (Ew!) tells him it’s not important. He couldn’t be more wrong of course. Connecting with someone who actually cares about him is something Marty desperately needs, and wants, to do. But doing that would require opening up, admitting his mistakes, and treating his inner circle as equal partners rather than pawns. And Marty, being the shark he is, would sooner show his teeth than bare his soul.

–I don’t know if I buy Clyde’s downward spiral. I’m not saying it’s totally improbable he’d turned to drugs–he’s trapped in a horrible job with a horrible boss who won’t fire him. But it just came out of nowhere. Stealing Monica’s pills last week just read as spiteful, not the first step on the road to addiction. I suppose his fight with a bartender over the wrong drink while out with Doug could’ve been a sign; but like the pill snatch, it just read as Clyde being his usual, boorish self.

–The scene between Katelyn and Jeannie in the former’s office was interesting.  When Jeannie explains her reasons behind shutting down Lucas’s non-stop flirting toward Katelyn during the meeting–it was a shrewd move to stroke Dre’s ego and keep the firm in his good graces–Katelyn gives Jeannie her props, and is told “You’re smart, and you’re attractive, but no one’s gonna hand you anything.” Good tip, but why would Jeannie give Katelynn, a girl she’s known for maybe a week at most, such blunt career advice when she dismissed, berated and manipulated Benita, who would have gladly washed Jeannie’s feet with her hair if there was oil at the ready?

When Doug ragged on Benita’s looks, it was easy to write it off as shallow douchebaggery; with Jeannie you’re left wondering if on some level, she believes beauty is not only an asset, but a prerequisite, for women to succeed in their world, and only those who possess it are worthy of her attention. Then again, Benita was a numbers girl and while Katelyn’s in the same position she was in season one, so I may be reading too much into it all.

–Speaking of Doug, it feels like the writers don’t know quite what to do with him. Last season it looked as though he was finally growing a backbone with help from Sarah. This season, Sarah’s barely been in any episode’s so far, and Doug’s back to groveling and brown nosing, hoping to get whatever scraps fall from the table.

–I really hope the show doesn’t let Marty off the hook when it comes to Clyde. Yes, he betrayed him by taking Carlson to Monica’s firm; but lest we forget, Carlson would’ve been a Kaan and Associates client had Marty not been fixated on screwing over former colleague Tamara (and Clyde, who played a big part in securing the deal). Marty has a lot of baggage when it comes to Clyde and Jeannie; it’d be a shame to let all that emotional fallout go to waste.

—Roscoe and Lex share their first kiss (aww, cute). Marty’s continuing to try and be cool about it, but you can tell it’s getting hard and harder for him to suppress his discomfort about Roscoe dating a girl currently dressing and identifying as a boy.

–In light of recent incidents involving racial profiling–as well as Jay-Z’s partnership with the store–I wonder the Barney’s reference was a deliberate, provocative choice on the writers’ part, or just an almost preternatural case of art imitating life.

–Nineties nostalgia alert: Dre mentions he and Lucas would argue over who was cooler, Kid or Play. And I must concur with Marty and Dre, that Play was in fact, the cooler one.