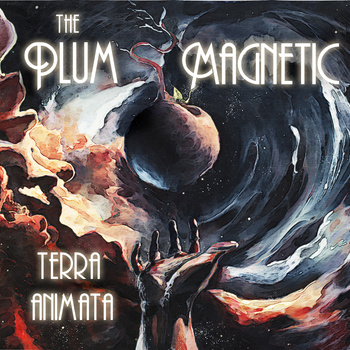 Drawing comparisons to Bela Fleck, The Grateful Dead and The Talking Heads for their blend of world, fusion, folk and rock, The Plum Magnetic  have created a buzz as one of the most eclectic groups in New Orleans.

Formed in 2011,  the band was built from years-long relationships created in the Crescent city’s music scene. Banjo player Trent and drummer Oliver met while playing in local band Eve’s Lucky Planet,  developing a mix of African, reggae and Afro-Cuban honed over jam sessions. The duo soon expanded to include guitarist and music teacher Andrew McLean , who brought his love of Indian Classical to the table, and ex-Gravity A member and bassist  Jon Solomon, who keeps the sometimes complex arrangements rooted in a strong groove.

The band’s latest release Terra Animata, utilizes all of these elements. The banjo and string-driven ”The Electric Jungle,” is full of intricate finger-picking runs, while”Sweet Confusion,” combines laid back reggae grooves with shades of hazy psychedelia.  ”The Delicious,” another standout cut, vacillates between beatific country  folk tune and jazz-infused jam, as Solomon pulls out an array of deep, pulsating licks.

Terrata Animata is slated to come out on February 23, but you can listen to the entire thing on The Plum Magnetic’s Bandcamp page.