Chuckie Campbell Gets Personal On ‘More Die of Heartbreak’ 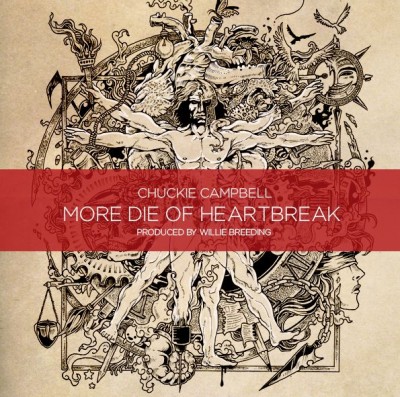 “The album draws on the seven years after a violent physical assault that left my jaw broken in two places, an event that would affect nearly every other human relationship that took place afterward.” When an artist describes their music in such stark terms, you can bet the psychological terrain they’ll be traveling through won’t be sweetness and light. Such is the case with rapper Chuckie Campbell’s More Die of Heartbreak.Taking it’s title from Nobel Prize winning author Saul Bellow’s novel of the same name, More Die of Heartbreak is brimming with dark, introspective musings and bracing, brutally honest revelations. First single “Synesthesia,”  with its laundry list of cultural identities from white rappers, black presidents, PTSD vets to boys wearing pink, and the quietly motivational “Speak,” find Chuckie focusing on the problems of the world.  ”All I Meant,” featuring Cole Jonique, turns the lyrical focus inward, both declaring and questioning what love is and is not.

Throughout the album Chuckie takes on different roles in his intricately drawn tales, playing victim, helpless observer or perpetrator. He is the innocent kid who witnesses a vicious hate crime in “How To Know When,” the abusive, self-loathing lover in the title track, the abused son of “Father’s Hands” or assault victim of a friend who later committed suicide in “Deus Ex Machina.”

The closet the album gets to traditional rap bravado is “Against The Grain,” featuring Wu-Tang’s Cappadonna and Solomon Childs, as well as Block McCloud. Everyone delivers the standard shots against haters of all stripes, but the chorus, with the lines “I don’t even have the will to fight/It’s not even worth going against the grain,” channels resigned defeat rather than rebellion.

Chuckie doesn’t let the proceedings slide into total nihilism however, packing the tunes with calls for unity and self-actualization. Willie Breeding of  The Breedings served as producer, and his influence keeps things on an even keel musically. Sure, there are plenty of melancholy strings and somber keyboards; but Breedings’ leaves his country, rock and folk fingerprints all over the album, incorporating pedal and steel guitar, along with some electronic flourishes.

While not every cut is home run, More Die of Heartbreak more often than not strikes the perfect balance of raw vulnerability and grim determination, acknowledging the demons that lurk in the world and inside oneself, while summoning the inner resolve to rise above both.