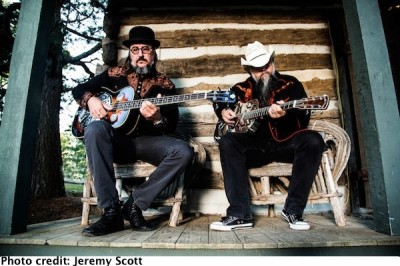 Les Claypool will be switching things up come 2014. The Primus frontman will hook up with old buddy Bryan Kehoe and hit the road as part of their new band Duo De Twang early next year.Unlike the funk-influenced thrash of his earlier work, Duo De Twang draws on Americana and roots rock  influences for their debut Four Foot Shack, slated to come out February 4. While the recording the album, Claypool and Kehoe made a point to keep the process as live-sounding as possible.

“It was very live,” admits Les. “In fact, it was a little difficult, with all the bleed of the stomping and the bass and the vocals. Every now and again you can hear the studio refrigerator come on or the dog barking at something outside in the background.  Once it was there, you had to kind of leave it.”

Tickets for the tour, which kicks off at the House of Blues in Orlando, FL on January 7, can be purchased here. You can also get a preview of Four Foot Shack’s sound by listening to a new take on Primus’ classic “Jerry Was A Race Car Driver,” here. View the list of tour dates below.