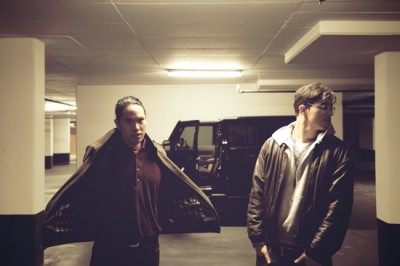 Call it a case of life imitating art. Or art predicting life–crystal balling  if you will. Whatever you want to label it, rap duo Times Neue Roman were unwittingly on to something when they filmed a video for “Late Night Toronto” last fall.

Depicting a traveling band of revelers on a night of sex, booze and coke, the video would be your standard “damn that was a crazy ass night” clip, if said revelers weren’t all clad in cartoons masks  emblazoned with Toronto Mayor Rob Ford’s face.  Ford has, of course, recently copped to smoking crack while in one of his “drunken stupors,” making the “Late Night Toronto” seem oddly prescient.

“We shot the video in the summer of 2012 and put it out about one year ago,” recalls Times Neue Roman’s Robert Bolton. “The concept of the video was just to use these masks of our mayor as a vehicle to explore Toronto’s after hours life … at the time, we thought we were sort of taking the piss in a pretty light-hearted way. And then this very troubling scandal started to unfold that the video predicted.”

Aside from the Ford masks, the video also features drag queen mayoral candidate Keith Cole and producer/rapper Rich Kidd, who guests on the track.  Times Neue Roman have also created a Tumblr page for fans to post images of late night Toronto life. Instagram users can tag #LateNightToronto on their nocturnal photos, and the images will automatically appear on the Tumblr page. You can also download the duo’s album Vehicle, which dropped yesterday, for free HERE.