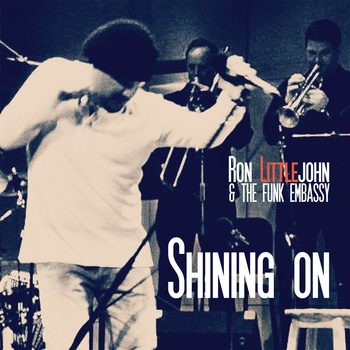 Coming together over a shared love of the golden age of 70′s funk and soul, Ron LittleJohn and The Funk Embassy inject old school flavor on their latest release Shinin’ On.

Featuring the best of the best of Montreal and Toronto’s music community, the album draws on R&B greats like James Brown–who Ron once opened for–Stevie Wonder, Curtis Mayfield and Sly and The Family Stone. Tracks like the gritty “Light Me Up,” with its raspy vocals, muscular, brassy horns and stripped down guitars and the rueful, Philly soul-inspired “Soul Devotion” drip with such throwback authenticity you think they were recorded in 1972. “Cream #9″ glides on a bouncy bass and warbled guitars, creating a house party vibe reminiscent of Marvin Gaye’s “Got To Give It Up.” That tune, along “Seems Like Yesterday,” mix record scratching and blending into the proceedings, a nod to several members’ previous life as a rap act, one who opened for Warren G and The Roots.

Title track “Shining On,’  found its inspiration in Ron’s impending fatherhood and the mixed feelings it caused among those in his circle. ”When I was about to become a father, some friends actually became resentful at the idea of me having new priorities. This hurt me like a bitch. I wrote this song to my unborn daughter trying to tell her no matter how mean the bastards get, keep on shining. I think it’s the best song I’ve ever written. So I thank those negative folks for the inspiration.”

Listen to Shinin’ On HERE.