The Boston Boys 'Keep You Satisifed' 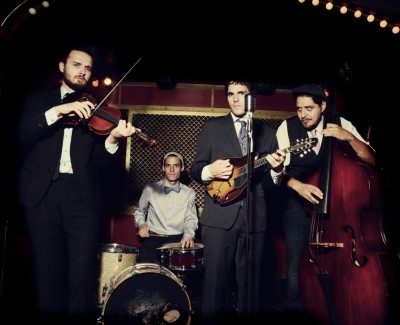 Formed while they were students at Berklee School of Music in 2009, The Boston Boys have become a staple of the city’s music scene, perfecting their electrified brand of bluegrass and folk through years of gigging,  both in Boston and throughout the country, including performances at SXSW and as one of seven bands selected for President Obama’s re-election campaign. Now one year on from the release of the debut EP What You Say, the group is back with their follow up, Keep You Satisfied. The five-song EP finds the quartet expanding on a sound dubbed “future roots,”  drawing on the bare bones acoustic vibe of folk and bluegrass while blending in elements of jazz, rock, soul and pop.

The title track and opener “Keep You Satisfied” is a pretty straightforward country-rock cut, but the boys start to switch things up on “Amelia,” flipping the fiddle into a exotic-sounding, classical violin and incorporating Latin-influenced rhythms. “Endless Creation” is an upbeat pop tune, but keeps ears off-balance with pitch-bending production effects. “Honeycomb,” comes on as simple, down home folk, but subtlety sneaks in some R&B-style bass and light funk breakdowns midway through. The band revels in their bluegrass and folk influences on closing ballad “Take Me Under,” the EP’s most conventional track.

Keep You Satisfied comes out on October 8. The Boston Boys will be hitting the road for a cultural diplomacy tour sponsored by the U.S. State Department in Morocco, followed by a private European tour in November. Listen to the EP here.