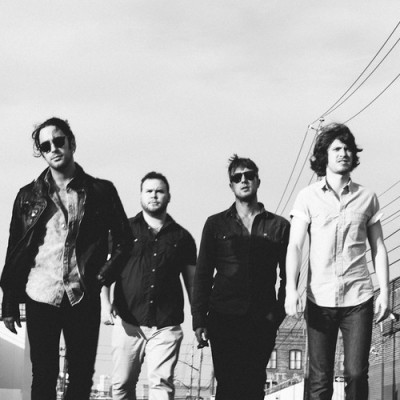 Alt-rock quartet Arc & Stones started off as a concept bandied back and forth between college buddies back in 2010. The concept became reality in the summer of 2012, when singer/guitarist Dan Pellarin and lead guitarist Ben Cramer relocated to New York City to start writing and recording music. Mutual friend and future bassist Eddy Bayes moved to New York and soon joined the band, which was completed with the addition of  drummer Joe Doino. Fast forward to the fall of last year and the foursome, now known as Arc & Stones, are playing gigs around NYC to support their self-titled debut.

An intense mix of hard rock, blues and soul,  Arc & Stones kicks things off with the bombastic one-two punch of the ironically titled opener “Silence,” and “Say Goodbye.” Both tracks are stacked with thick power chords, melodic, interweaving lead guitar and big drums. “She’s Mine,” and the equally pummeling “Rise,” veer into grimier territory without sacrificing catchy hooks or melody.

The band is in fine form, but what truly gives the songs their emotional weight is Pellarin’s singing. His vocals are strong enough to wail alongside the guitars, but are also carry enough depth to express raw emotion, as on the achingly vulnerable “Let Me Down,” a guaranteed get-your-lighters-and/or-cell-phones-out anthem. Listen to some of the songs from the EP here.