The MonaLisa Twins Update '60's Pop Sound On 'When We're Together' 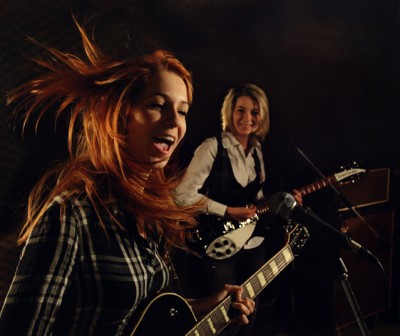 Built on a foundation of upbeat guitars, harmonica, ukulele and harmony, The MonaLisa twins bring their love of 60′s pop , folk and rock into the 21st century with their debut When We’re Together.

The bands namesakes, twins Mona and Lisa, form the core of its sound. Born in Austria, the girls grew up listening a wide range of music, but were consistently drawn to influences like The Beatles, Bob Dylan and Simon and Garfunkel. Yet while they look to the past for inspiration, they aren’t interested in being labeled a throwback act.

“We aim to write songs which we ourselves would like to listen to, and we always loved the spiritual, humorous and true-to-life mindset of the 60′s,” they said. “However, we aren’t nostalgic about it or trying to be ‘retro.’ We simply believe that something great had been started in this era that is worthy of being continued.”

Whether listeners flock to their music for its retro appeal or not, The MonaLisa Twins’ classical approach to pop music has garnered them a following, both their home country, the U.K. and increasingly in the U.S., where their songs have been popping on radio playlists and their faces have been cropping up on TV.

The band has also created an online buzz with their inventive videos. Their latest clip for the album’s title track, uses time-lapse technology to show the band and a group made up of random passers-by collaborating on a painting. For the girls’ the video was a chance to bring the song’s title to life.

“We were thinking about a creative way to get lots of people involved in a connecting, artistic project, all in the spirit of the song title…we installed a canvas on the walls of Stables Market in Camden, London’s world-famous art district. We ourselves started with a big red heart in the center. Pedestrians joined in and added their ideas and colors to the painting. This day was just another evidence for us how much the arts are able to lift up the spirits and make people happy,” they said.