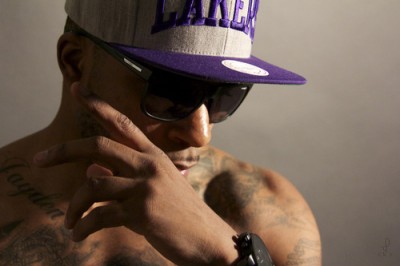 Born in Philadelphia but raised in Greensboro, North Carolina since the age of two, Stacks began writing rhymes in middle school. Inspired by fellow southern MCs like T.I., he formed a group with friends called LGi, and though the group eventually split, he held on to the name when he went solo, dropping his debut album This Is Me in 2009. Despite little to no marketing, the album caught fire, and led to 2010′s Before I Drop EP, which spawned fan favorites “Intro” and “Ask Me,” and 2011′s One Stop Shop, that included the YouTube hit “Where Do I Go.” The exposure led to gigs opening for Big K.R.I.T., Nappy Roots and Yo Gotti.

Encouragement, Stack’s latest EP, builds on the foundation of his earlier work while pushing toward a bigger audience. Big is also an apt description for Encouragement‘s sound. Two-ton bass and drums rattle alongside heavy, distorted vocals and layers of synthesizers that both reach for the sky and dive to subterranean depths of gloom. The wall-of-sound production style, along with Stack’s unassailable, energetic flow, powers tracks like  the chest-thumping “I’m Feelin’ Myself” and brassy space-age sex jam “Boulevard On Mars.”

However, the EP’s most interesting musical moments come when the big-is-better approach is inverted on cuts like somber album opener “Lost,” the anthemic, industrial-esque “MLK,”  and closer “Can’t Stop Me.” On these songs, the electronic effects and distant backing vocals whoosh and float around like air breezing through cavernous caves, adding an anxious, at times eerie vibe to the music.

Encouragement comes out September 17, but you can listen to the EP in its entirety over at Young Stack LGi’s Soundcloud page. And if you want visuals, check out his video for “Lost” below.