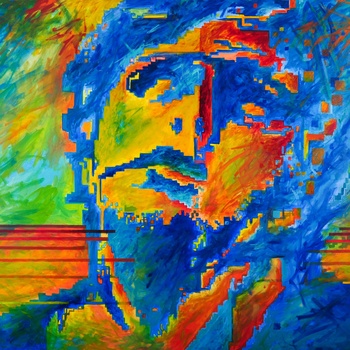 Hailing from the Lone Star state, the foursome known as Liquid Casing joined forces with a goal to develop a unique sound and approach that would push the limits of dynamics and song structure.  The band’s latest release A Separate|Divide puts that plan into action with startling results.

“A Path of Footprints Forged In The Midnight Sun” kicks things off with a little Sonic Youth-style lo fi guitar crunch and droning bass line, but up ends the usual formula by making a detour courtesy of a solo that conjures the shredding skills of 70′s rock gods of yore.

A backward masked riff signals the start of “Alambrista,” before  a muted, frenetic guitar lick and a sax that wails like it was lifted from a long-lost Miles Davis B-side takes center stage. Just when your ears adjust, the song goes off on another tangent, exploding to a wide open space of saxophone, thunderous drums and grungy power chords before slinking away with a squirm-inducing electro effects. The whole thing should be a colossal mess, but it somehow all the dissonant pieces fall into place.

“The Line Which Divides” gets its kicks with searing,  psychedelic-tinged feedback roaring against a sultry jazz combo that comes off like the perfect soundtrack to some unforgettable trek through the Sahara in the dead of night. With its unsettled rhythm, “For A Memory Erased” also draws inspiration from the Middle East. Starting off as a huge soundwall of winding, ethereal guitars, rumbling drums and quick-fingered bass work shifts the mood from ethereal ascent into the heavens to a trippy, slightly ominous march.

Liquid Casing still know how to pulverize ear drums the old fashioned way though, as they demonstrate with the pummeling aggression during a section of “Non Linear Solution,” while the acoustic guitars and cinematic synths of “Checkpoints and Borders” proves they’re just as adept at stripping thing down as they are piling them on.

While the band is fearless when it comes to musical experimentation, it would been great if they taken the same confrontational approach to the lyrics. Most of the songs are purely instrumentals. and the tunes that have lyrics, while sticking to the album’s theme of the politics of division, are way too vague and are pushed out too quick and too often by the accompanying soundtrack to elicit any strong emotions.

The sonic tricks employed on A Separate|Divide provide a fascinating, and at  times challenging listen. Though it would have been a bolder statement if the divide between lyrical and musical content hadn’t been so wide.