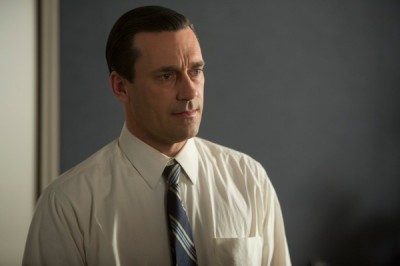 As always, spoilers lie ahead…Goodness where to start? Last night’s Mad Men was without a doubt the strangest, trippiest, and outright hilarious episode in the show’s history.”The Crash” started with a literal one involving Ken driving an Impala packed with crazed Chevy execs, and after a shot of “energy” from a good doctor, became a physical and emotional one, as the men at SCDP all found themselves flaming out, flashing back, or in the case of Ken, doing a little dance in the face of darkness.

Mad Men at its core has always been about the unraveling of Don Draper (I know, a groundbreaking revelation right?), slowly peeling back the layers of his cool exterior to revealed the tortured soul underneath. Since Don’s not exactly talkative, at lot of the unraveling has been via flashbacks while high on weed (“The Hobo Code”), being death’s door sick (“Mystery Date”), drunken confessions (“Long Weekend,” “The Flood,” “The Suitcase”–hell almost anytime Don’s knocked a few bottles back and his world’s in upheaval) or impulsive road trips that reveal parts of his complicated past in the flesh (visiting Anna Draper and her clan in “The Mountain King” and “The Good News”).

But rarely, if ever, have we’ve seen Don’s inner messiness so outwardly on dispaly as it is in “The Crash.” Though he’s not the only one; after Jim Cutler, a.k.a Roger 2.0, arrange for the SCDPCGC staff to get shots to cope with the ferocious creative demands of Chevy, the boys pretty much lose their shit. Stan challenges Jim to a race through the office, before challenging the lesser minions to arm wrestling contests. Later he kisses Peggy and, after getting a polite brush off, admits he’s grieving over the loss of a relative in Vietnam, but ignores her sage advice to allow himself to feel his pain and goes on to bang some random girl who turns out to be Wendy, the late Frank Gleason’s daughter, in the office, while a gleeful Jim Cutler looks on.

Peggy’s advice to Stan struck me as a little disingenuous and ironic at first; after all, this is the same woman who took Don’s advice to act like having a child never happened and ran with it. But on second thought, just because she pushed it out of her mind in the immediate aftermath doesn’t mean she didn’t allow herself to feel the pain and truly move forward later. Along with her continued effort to build a real, honest home life with Abe, this is another way Peggy maybe striving to be more emotionally mature than her former mentor. Pretending something didn’t happen and compartmentalizing your inner demons means you never really face them head on, as Don’s repeated falls into the emotional abyss over the past six seasons have shown us. Though in his case, there is a lot compartmentalize, and another series of flashbacks to his whorehouse childhood gave another piece of how the child became the father of the man.

We learn Don, while fighting a cold, was given the motherly treatment by Aimee (being spoon-fed soup, getting tucked in and the whole nine) then got seduced and deflowered by her, before being humiliated and beaten by his loveless stepmother after she found about it. So let’s get this straight: Dick Whitman’s birth mother was a prostitute, his stepmother was a harsh disciplinarian who regularly referred to him as a whore child, and the woman who was first maternal towards him was a prostitute who then became his first sexual experience. After which he was beaten and berated by his stepmother as trash for engaging in. Sweet God, no wonder Don has issues about women, viewing them all with a mix of lust, distrust, contempt and the hope they can somehow rescue him from his own misery.

Why else would he be pining at Sylvia’s door, when we haven’t gotten to see any other facets of this woman’s personality aside from being Catholic, anti-abortion and prone to feeling guilty after a few rounds of  hotel S&amp;M? Though judging from her little speech about the mutual trust involved in extramarital affairs, I do wonder if her dalliance with Don was her first time at the adultery rodeo.

But I digress. Hyped up on what looks to be some type of speed, it’s doubtful any woman–or anybody for that matter–would want to deal with the babbling, incoherent mess Don devolves into, rifling through old campaigns as he tries to string together a Chevy ad campaign driven by visions of Aimee and Sylvia, and sporadically spouting off pseudo-intellectual drivel that fails rile up anyone who’s not riled up on drugs (i.e. Peggy). Finally passing out in his living room after being awake for an entire weekend (or maybe it was the sight of seeing Betty and Henry in his house–turns out a robber came in posing as Don’s Grandma Ida) he regains sanity just in time to see Sylvia in the elevator. “Busy” he replies when she asks him “How are you?” Though the real punch in the gut comes when he calls Sally to assure her he’s okay. “I asked her everything I know and she had an answer for everything.,” Sally says. “Then I realize I don’t know anything about you.” Ouch, but them’s the brakes when you keep everyone in your life, including your kids, at arm’s length.  He advises her to forget about it–oh Don, have you learned nothing–and takes the blame for leaving the door unlocked for the robber to get in.

Don hangs up, goes to Ted’s office–whose own world unraveled with the death of Frank, his long time partner and friend–and basically throws Chevy into his lap, falling back on his creative director title. “Every time we get a car this place turns into a whorehouse,” Don says on his way out, washing his hands of any responsiblity. In the moment it’s obviously a reference Wendy’s activities with Stan and the general weekend insanity, as well as Joan’s Jaguar sacrifice, but it can also apply to the latter’s aftershocks; Peggy’s initial departure, Lane’s suicide, and having to tap dance (shout out to Ken Cosgrove) around Herb’s gross demands. But could facing the reality that his children’s safety was violated also have a role in pulling Don back from the brink? Only time will tell.

–Ken breaking out into a tap dance routine rivals Pete and Trudy’s Charleston tour de force in season three’s “My Old Kentucky Home,” as the best of display of showmanship ever on Mad Men.

–Nice to see Betty getting back to her fighting weight and bottle blond fabulousness. Though I do wonder how she would’ve turned out her black bob.

–The scene in Don and Megan’s apartment with the robber was filled with tension, fear and uncertainty. It felt like things could have gone very, very south in a nanosecond. On the surface, it seemed like Sally should’ve been able to see through Grandma Ida’s mountain of crap, but as she said, she knows nothing about her father. Who’s to say he wasn’t raised by or didn’t at some point know a black woman named Grandma Ida or by a pack of wolves?

–Roger to Don: “You face looks like a bag of walnuts.”

–Bobby to Sally: “Are we Negroes?”

–Ted’s “I’m fine thanks for asking” to Don and Jim was nice call back to hobbled Ken saying the same thing to him at the start of the episode, proving Ted isn’t above being thoughtless and self-absorbed when it comes to work.