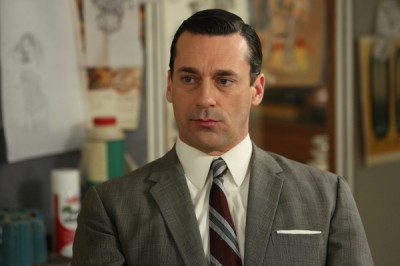 As always, spoilers lie ahead…Last week’s “For Immediate Release” saw the inevitable merger of SCDP and CGC (they have to decide on a new name; I mean the cost of putting all those letters up on the door alone…), in an effort to compete with the big boys. With the merger of any two parties, there are bound to be growing pains, casualties and unforeseen challenges, and “Man With A Plan,” dealt with those themes, as well as the idea that both parties have their own plans and agendas simmering just beneath the surface.

Don’s relationships, both with Sylvia, his new partner Ted, and to a certain extent Peggy, undergo their own power struggles. The episode opens with Don in the elevator, going down to the lobby. The elevator stops on the Rosen’s floor, opening up to a suitcase and hat and letting Don (and us) get an earful of Sylvia screaming at her husband. Apparently the good doctor has taken a job in Minnesota that isn’t sitting too well with her. We never see them (which IMO adds to the fight’s ferocity-I guess Don’s “use your imagination” pitches have rubbed off on me) but basically she accuses of him selfishness and only caring about his career, and snaps at him to “take some money” before a bunch of (change? a piggy bank?) crashes against the wall.

Later she calls him at the office, and tells him “I need you. And nothing else will do.” For a man who is obsessed with needing to be needed and needing to be wanted, its music to the ears. Sylvia thinks she’s just engaging in a little harmless flirting, but she’s really signed the death warrant for her marriage; not only has she given Don the green light to take his emotional investment in this affair to the next level, she’s unwittingly given him permission to get his own controlling hooks in her. For now, it’s taken the S&M shape of being order to put his shoes on for him, staying in a hotel room for days on end and wearing a red dress (whore alert!) then taking it off for another go around at his command.

She does end the hotel affair after having a dream about Don dying in a plane crash (more on that in a minute), comforting Megan at his funeral and going home with her husband. “Let’s go home,” she tells him, stroking his pensive face, claiming shame has made her see the error of her ways (and also insinuating he has none since he wants to continue their tryst). And she doesn’t look back when she exist the elevator in their building. But it’s notable she said “Let’s go home,” not “I’m going home.” And while Don didn’t see the conflicted look on her face when he uttered a soft “please” for her to stay, we did. She may have closed the door on the affair, but intentionally or not, she’s left a window open that Don will definitely try to crawl through. Things can’t (or they better not) end with her simply walking away. Even Don’s not enough of a smooth operator to get away with a dalliance this stupid and brazen. By the end of the episode, he’s tuning Megan out while she chats away about vacation plans on the couch, and doesn’t even bother to comfort her while she cries watching footage of Bobby Kennedy being shot. She probably thinks he’s in the detached state of mourning he falls into whenever national tragedy strikes, but little does she know he’s grieving over something else entirely.

Meanwhile at the offices of SCDPCGC, Don’s wrapped up in another game of dominance with Ted. Ted unknowingly provokes Don when he mentions he can fly to a meeting with Mohawk in his own private plane, and again when he criticizes him for being forty minutes late to a creative meeting about margarine. Don offers an olive branch in the form of alcohol; Ted tries to play like he can drink with the big boys–or the boys with livers of steel–but this is Don Draper we’re talking about, and soon Ted’s splayed out on his couch, listening enraptured while Don spiels some country-home cookin’ fantasy and drunkenly asking Peggy and everyone else what they think of the ’68 election.

Round one goes to Don, but Peggy’s not happy about it, telling Don she hoped Ted would rub off on him, not the other way around. “He’s a grown man,” Don snaps when she makes a crack about his legendary drinking. “So are you,” Peggy says, but she might want to give that same talk to her other boss.  After talking about Don’s mysterious nature and elegant cool to Frank Gleason in the hospital, Gleason gives some sage advice to “let him win the first few rounds. He’ll tire himself out.” Cut to a cool and calm Ted flying his plane to the Mohawk meeting while a rattled Don tries to read a book he took a Sylvia. Round two Ted, but these little battles are just symptoms of what may later turn into a bigger conflict as Don tries to keep the office atmosphere under his domineering, capricious thumb and Ted tries to mold it in his more optimistic, collaborative image. And Peggy will ultimately have to choose a side if Don and Ted can’t find a way to work with and not against each other.

Ted and Don’s power plays–along with their decision to go to the Mohawk meeting without him–have left Pete feeling like the odd man out. And life has thrown him a curve ball in the form of his mother suffering from dementia; the two never got along, so it’s not surprising he tells his secretary Clara that she can burn in hell; but having to take of her alone (his brother Bud’s already done his part, and his wife Judy already took one for the team by getting a towel snapped in her face)  is affecting his ability to be present at work, feeding his already insatiable insecurity that he’s being lost in the merger shuffle. Of course, if he hadn’t blown up his marriage to Trudy by throwing her father’s infidelity in her face and perhaps tells his partners about his mother’s illness, he might have had some help and get some leeway in the office. But by circumstances both self-inflicted and out of his control, he’s now in a vulnerable position, and must fight to keep his spot at the table, as other employees like Marge–so long, we never knew ye–and Burt Peterson are getting the axe.

Speaking of Burt, the whole scene with Roger firing Burt Peterson felt off to me. Roger’s almost always flippant, but rarely purposefully cruel, and the aggression he displayed toward Burt seemed very out of character for him. I didn’t expect Roger to be in tears saying “I hate that we had to do this,” but I wasn’t expecting him to fire the man with such glee either–unless there was unspoken beef between the two, which, by the looks of the “previously on Mad Men” flashback, there wasn’t. So your guess is as good as mine. After viewing the episode a second time, it may have been Roger was threatened by Jim’s glowing remarks about how much a client loved Burt. Though even that’s kind of a small thing for Roger to get bent out of shape about.

Also, Bob and Joan’s little jaunt to the hospital (she had a cyst on her ovary, don’t worry, our girl’s fine) felt disconnected from the rest of the episode to me. I realize the whole thing was designed to show Bob is not only a first rate ass-kisser but also a smooth manipulator and liar whose skills and “plan,” whatever that is at this point, ultimately saved him from getting the boot, but it felt like the writers were trying to smash his character into the theme instead of him blending in seamlessly. I think his storyline would have worked much better if he played some kind of hand in helping Pete out in his current dilemma, as he’s already weaseled his way into his good graces. Don’t get me wrong, I’ll take all the Joan I can get, but her and Bob taking a side journey just felt contrived to me.

All in all, “Man With A Plan” wasn’t one of my favorite Mad Men episodes, but it did set up several plot lines and offering a peek into some interesting character dynamics that could pay off big time down the road.

—Where the hell was Dawn?

—Loved Joan’s mother’s line about younger men not being threatened by strong women. If anyone should be the first settler in Cougar Town, it’s the woman responsible for bringing Joan Holloway into this world.

–Sadly, being canned by the same guy twice isn’t that uncommon, both then or now when mergers take place. At least Burt Peterson got to fire off this gem on his way out to Bob. “As a first order of business, I recommend you stick your head between your legs and kiss your ass goodbye. Oh Burt, why didn’t you ever write copy? I could just see the “Kiss Your Ass Goodbye” tag line for Belle Jolie Lipsticks back in the day.

–Peggy to Don: “Do you want me to answer that?” when Dawn’s phone rings. That should’ve been a clue that she wasn’t 100 percent happy with this merger.

–Though we just met him, like, an episode ago, I really liked the scene between Frank Gleason and Ted in the hospital. The two actors did a great job of making you believe these two men are friends who have been in the creative trenches together for decades.