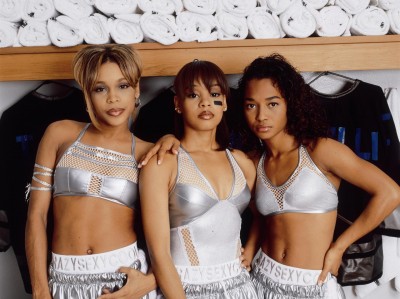 TLC seem to be gearing up for a comeback of sorts in 2013. In addition to the debut of their VH-1 biopic CrazysexyCool: The TLC Story, Rozonda “Chili” Thomas and Tionne “T-Boz” Watkins plan to take the stage at the Mixtape Festival in Hershey, Pennsylvania on July 27.

“With the biopic coming out, it all makes sense,” Thomas told Entertainment Weekly. “We always knew, when shooting the film and when it comes out, we wanted to tour in the States.”  TLC has also been back in studio working on new music, recruiting artists like Ne-Yo, Drake and J. Cole for the sessions.

“Everybody has shown us love. Not one person has said ‘No,’ and that’s amazing,” Watkins said. “So we’re just going to go in and demo and demo and figure it out. I talked to Dallas [Austin] today, we’re Skyping to see if I want to do this song that he has. I just left the studio last night. I go in again tomorrow.”

Crazysexycool: The TLC Story stars Keke Palmer, Lil’ Mama and Drew Sidora and will be out later this year.