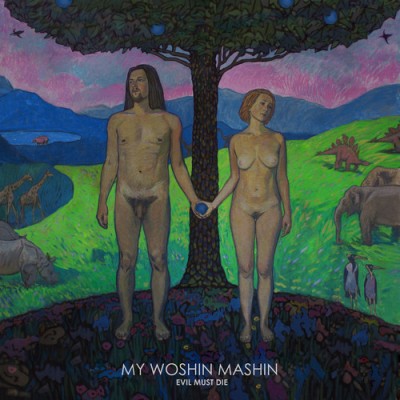 You wouldn’t necessarily expect a group that goes by the name My Woshin Mashin to be all that concerned about the state of the world.  Yet on their forthcoming album Evil Must Die, the trio, comprised of Bibi Tulin, Hugo Simmons and Wolfgang Scherman, are hell bent on tackling serious issues set to intense grooves.

Formed three years ago when Tulin and Simmons left their respective bands and hooked up with Scherman–a Berlin resident fond of wearing a chicken mask–My Woshin Mashin combine a love of German dance music and English metal to craft a sound that is at times menacing, strange and almost comical, but never boring.

Evil Must Die kicks off a ferocious note. The first three tracks–”Riders Of The Storm,” “Hobo Rap” and “They Live”–are a flurry of floor-rattling beats, spoken word clips, distorted voices and industrialized synths. Tulin and Simmons share vocal duties, with the former’s style offering softer alternative to the latter’s gravelly raps.

The contrast is in the music as well; tracks like “Superhero,” and “Babylon 4″ ease off the mechanized assault, allowing Tulin’s sweet, at times vaguely operatic voice to hold court over surreal, electronic soundscapes punctuated by trippy bass lines and ethereal backing vocals. “Smell of Love” fleshes out an exotic groove with flanger guitar and bongos, and–wait for it–an accordion solo. Such radical sonic detours make for an exciting listen, though they sometimes come at the expense of giving Evil Must Die an overall cohesiveness. Or maybe it’s the sequencing; setting a breezy pop cut like “Betelgeuse” right beside a grimy banger like “Vodka” can be jarring.

As for the subject matter, the lyrics cover everything from corruption in modern society (“They Live,” “Babylon 4″), the lonely road do-gooders often travel (“Superhero”) to alcoholism (“Vodka”) and love as a redeeming force (“Sun and Rain,” “Bradbury”). But it might have been a good idea for the band to turn up their vocals, particularly Simmons, whose words sometimes get lost in the mix, so all their thoughts could be clearly heard.

In the end,  Evil Must Die is an ambitious,  adventurous album whose musical hooks provide plenty of twists and turns for listeners to savor.