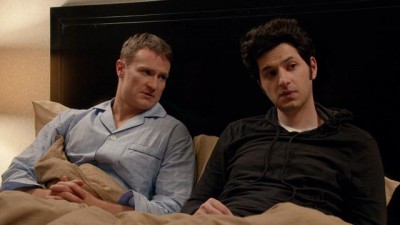 As always spoilers lie ahead…Last week”s “Wonders Of The World” saw Jeannie hook up with Nate (Adam Brody), owner of sex toy company Doc Johnson, while Marty took Tamara up on her offer to share her bed, further complicating their drunken blackout-I-love-you confession. This week”s episode “Liability” lets drama breath a bit while showing Clyde has a soul, and Monica”s a human being.

We start off with Marty and Tamara in the mirror cooing post-coital talk, interspersed with shots of them doing the deed. Everything is all smiles and reminiscing–Marty joking about being married for a decade has Tamara in a sex rut, Tamara saying she would”ve given him some back in the day if he hadn”t starting sleeping with the Anti-Christ, a.k.a, Monica–when Marty tells her he wants her to meet Roscoe. Tamara recoils at this splash of reality, and she shoots him a look that screams “I am so not ready for all that.” She tells him as much, and the two trade awkward banter about kids and ex-husbands before she embarks on a scavenger hunt for her panties. Marty looks in the mirror and berates himself for bringing up meeting the kids too soon. It”s touching in a way–Marty is usually so detached when it comes to sex, it”s nice to see him be a little neurotic.

Cut to Marty at Monica”s house, on the phone with what”s assumed to be his accountant as he plots his escape from Galweather and starting his own business. Unfortunately he finds a vial of something that lets him know Monica”s sobriety is on shaky ground at best. He lets her gloat about Roscoe coming to live with her due to him utterly screwing up before playing his ace in the hole. She doesn”t confirm or deny she”s fallen off the wagon, but warns him that she if he wants war, she”ll destroy him. Well actually what she said contained  few four letter words, both you get the idea.

I wasn”t fully on board with the return of crazy Monica when I saw the previews; it seemed like a cop out, a cheap undoing of what felt like a legitimate attempt by the character to get her shit together. But her saying “I love you” back to Roscoe–a complete 180 from season one, when she wasn”t sure if she knew how to love her own child–and the anguished look on her face watching him leave shows a genuine pain deeper than her desire to emasculate Marty. Though there”s no doubt she wants to do that too.

Speaking of Marty, he and the Pod have a meeting with their Vegas client Carlson. Carlson of course, is unhappy about some business plan the Pod put in place for him, even though he was the one who approved it–during a six-hour conference call. Oh, and let”s not forget he”s brought a new pet along with him, a ferrett named Marty. This guy is certifiable. But he is a major account, which is probably the only reason why Marty lets ferrett Marty take a piss all over the aformentioned business plan. Love him or hate him, you can”t say Carlson doesn”t have a flair for symbolism. And animal training.

Carlson wants Marty to work out a new business strategy, but he can”t because he”s been subpoenaed to appear in Nebraska for a suit involving P&amp;G. Carlson doesn”t give a crap about some “Mickey Mouse subpoena, which leads to an intense exchange between Marty and Carlson over whether the former should stay or go. At least until Carlson starts making kissy face with the ferrett Marty.

After meeting Doug on the phone with Sarah, and ends their call with an “I love you,” causing Clyde to sigh with derision. Doug calls him on it, and they get into a hilariously petty argument about it. Doug asks Jeannie to mediate, but she”s got more self-absorbed matters to attend to; those matters being working with Tamara and the confirmed fact Marty”s “hitting it.” Doug immediately jumps to dreams of a double date with Marty and Tamara and he and Sarah (or as Clyde calls her “girl Doug”)–dude who are you, Pete Campbell?

Marty”s in his office when Tamara”s husband Kevin waltzes in all friendly. He tries to play the hurt husband/best bud angle, talking about how Tamara”s changed the locks and generally been blowing him off. “I know you have the inside scoop. You”ve always been a good friend,” he tells Marty. “But lately T”s been…” “Fucking me,” Marty says, finishing his sentence. We knew from the jump Marty was blunt, but dayum. Kevin, understandably as caught off guard as the rest of us, stammers “I”m sorry what?” Marty plows on, saying “I”m sleeping with your wife” like someone just asked him what time it was. Kevin, who by the way probably has about six inches and 40 pounds on Marty, jumps up from his seat. Marty wisely moves back and grabs a heavy object.

Kevin compliments Marty on his directness, and claims he”s the same way. But Marty calls bullshit, saying Kevin”s whole “hey buddy how”s it goin”" routine was just a smokescreen and repeats that he”s sleeping with Tamara, likes sleeping with Tamara and will keep sleeping with Tamara. I can”t decide if Marty”s super sprung or just as nuts as Carlson. He tells Kevin he has to catch a plane. “I guess I”ll leave you to your stuff,” Kevin says, before letting loose a fake laugh that says “I”m gonna catch you slipping and beat that ass you backstabbing bastard.”

On the plane to Nebraska, Doug and Clyde snipe some more. This would be nothing new, save for when Doug mentions some lackluster cookies (one”s that tasted like dog biscuits to be exact) Clyde”s mother made after he scored big consulting with P&amp;G. “My mom worked a 60-hour work week, so I”m sorry if her cookies didn”t meet the standard of your fucking dog biscuit eating palette. It”s about time we got at least a small peek into Clyde”s past.  Proving he”s finally learning to dish out instead of just taking it, Doug spits “Was that below the belt? Well so was hitting on my girlfriend asshole.” Snap. Marty congratulates Doug on his balls finally dropping, which allows Doug to again indulge his fantasy of having a double date with “TaMarty.” Tamara Marty=TaMarty. Get it? Yeah I gagged too.

After they touch down, a suit from P&amp;G explains the plaintiff, a widow whose husband fell off a cell phone tower, is trying to claim the company”s subcontracting model–which Clyde pitched–was put in place to spare the company any liability. The suit explains the lawyers might try to put Clyde in the middle, and dismisses the husband as an “adrenaline junkie trying to get high on minimum wage.” All the while Clyde vacillates between defending himself and trying to keep from being incinerated from the death stares the widow shoots him.

Obviously Clyde sees himself in the little boy and his mother sitting on the couch. While it”s nice to see Clyde may actually have a conscience, it comes off as a little too convenient the plaintiff would be a single mother just after Clyde”s own background is hinted at. Maybe if the writers had dropped some crumbs for us earlier in the season, it wouldn”t feel as heavy handed. But any character development with Clyde is better than none at all, so movin” on.

Back at the office, Jeannie and Tamara are working when Jeannie asks how her kids are doing. Tamara says their fine before letting her know kids don”t always have to be the topic du jour when they”re alone. Especially when she knows Jeannie wants to cover other subjects. Jeannie takes this as a cue to say “you and Marty sleeping together is none of my business.” She forgot to add “not that I wouldn”t like it to be.” Tamara let”s her know it isn”t any of her business before saying she was referring to Marty opening his own shop. Jeannie asks Tamara if she”ll go with Marty to his new firm, and she laughs, saying she”s not a teen tagging along with a boy she likes.

Malcom”s still squatting at Marty”s apartment, when guess who”s at the door? Monica! The two exchange little pleasantries and sip on some alcohol until Monica, being the mercenary she is, lays out what she”s really here for. She lets it be known that Marty told her she was a frequent deposit in Malcom”s spank bank back in the day. She also lets him know he was in her thoughts as well, and gives him a demonstration. He pounces and she teases him for a bit before letting him in.

Doug and Clyde end up having to share a room because Galweather forgot to book a room for Marty. Another mind game from Julianne? Eh, probably more of an oversight. Either way, the cramp quarters allow Clyde to finally get to the root of what”s bothering him; that while

he and P&amp;G get away scott-free, a man is dead and a little boy grows up without a father. And boom, we have depth! Doug, being the cornball he is, offers Clyde a two-hug deal; Clyde resists at first, but gives in, leading to one of the few genuinely touching moments between these two characters. Of course, this is Clyde and Doug we”re talking about, and Clyde feels something hard in Doug pants. It was a flash light, but insert your own crude joke here. The two lapse back into frat boydom, and go to sleep.

The next day, Tamara confronts Marty about telling Kevin about their hotel rendezvous. Marty explains he”s serious about creating something real with Tamara, but she says the reality of their relationship is more complicated than them running off together. He says it”s not, causing her poker face to crumble as she tears up a bit. Even so,  I think Marty”s way more invested in this than Tamara, but that could change.

While Marty”s trying to move forward, Monica”s regressing to her old ways. Roscoe”s presence seemed to be the only thing holding her together, and now she”s falling apart. As I said before, when I watched the preview last week, this scene read more as “uh oh, Monica”s psycho again!” But put in the context of both the episode and the entire season, her loneliness and self-loathing resonates. Marty thinks she”s damaged, her mom thinks she”s damaged, Malcom thinks she”s nuts–though he doesn”t mind wading into the craziness. She”s made a real effort to turn things around for herself, to build a new family and life, but Roscoe”s decision to leave has left a gaping hole. So she reverts to playing the role defined for her.