House Of Lies Season 2 Ep. 8 Recap: Wonders Of The World 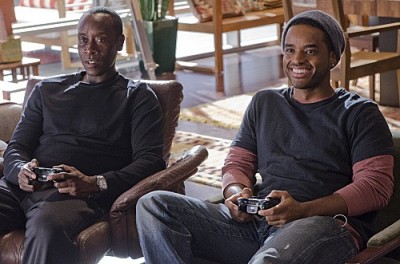 As always, spoilers lay ahead…Last week’s “The Runner Stumbles” ended with Marty getting assaulted by two cops, after making the soul-sucking decision to play the good negro and cover up U.S. National Bank’s “ghetto loans” scandal in order to finance his own firm. This week’s episode, “Wonders Of The World,” deals with the aftermath, as well as sets up new twists to further complicate Jeannie and Marty’s “will they or won’t they” story line.

We open with Clyde, Doug and Jeannie at Doc Johnson, a new client who specializes in dildos and the like, or as Jeannie calls them, “silicone fuck toys.” Speaking of Jeannie, she’s not in the best mood, ranting about where both the shop owner Nate (Adam Brody) and Marty are. Clyde, being about as gleeful as you can expect he’d be in a sex top shop, advises Jeannie to improve her mood by thinking up an anniversary gift for Doug to give Sarah. And judging from his ideas–a hat, or a Jesus light switch plate (since Sarah’s Jewish and all)–poor Doug needs all the advice, cynical or not, that he can get.

Marty calls Jeannie and tells her he’s taking a few personal days off, which, looking at his stitches and black eye, may not be such a bad idea. Jeremiah walks in with coffee, and asks him when he’ll tell Roscoe about the attack, causing Marty to shoot him a look that screams “can I least get a sip of Java before I tell my son about my traumatizing experience?” Things don’t exactly improve when Marty realizes the third cup of Joe is for Malcom, who upon making his entrance, promptly tells his brother he looks like shit. Feeling the love yet?

Harsh words yes, but we know our Jeannie Bennie doesn’t scare easy. She fires back, saying stick up your ass could a very good product for Doc Johnson, but Nate gets the last word when he says her scowling mug could be used for the packaging. Touche. Later on, Jeannie’s special delivery arrives at the office, and this stuff must be selling like hot cakes, since her co-worker knows exactly what the Doc Johnson box holds inside. Jeannie locks the door, and lets one of the toys work their magic. Who’s uptight now smarty pants?

Malcom and Marty are playing video games and talking about their dad. It sounds like Jeremiah had and still has a knack for pontificating about a situation until his original point–to teach his kids a lesson or dole out advice–gets lost. And if Marty’s memory of his mother rolling her eyes at his father’s lectures is any indication, she was most likely the earthy yin to Jeremiah’s overanalytical yang. All of which could make her suicide both more puzzling and disturbing to the Kahn men. Hopefully this bit of information will be explored later on. But back to the recap at hand. The brothers seen to be bonding, until Malcom mentions that some of his people have been calling him and suggesting Marty go to the media about the attack. Marty shows his disinterest by kicking Malcom’s ass–in the game at least–and walks away.

Meanwhile, Doug has been brainstorming and has a great idea to help Doc Johnson–allowing everyday folks to make molds of their own private parts, including his own, which of course would the perfect anniversary gift for Sarah. Jeannie and Clyde, being of sane mind and body, shoot his idea down, and Doug brings up Clyde’s jealously of his relationship. Though this time I think Clyde was exercising common sense. Nate stops by and offers to take Jeannie to lunch, but she’s already eaten. The two banter about going to get tea, which eventually leads to her going back to his house.

Marty, waiting for Roscoe at his school, gets a text from Tamara but ignores it. More on that later. While at the zoo Marty tells him about the attack, and Roscoe is livid. He calls the cops racist, and Marty doesn’t entirely dismiss it, but explains that good and bad people aren’t always easy to spot. He tells Roscoe he admires him for being who he is and owning it, but warns him life will not get easier, and he must make smart choices. In a heartbreaking moment, Roscoe says something similar could happen to him. Marty presses his head against Roscoe’s and tells him it won’t, then Roscoe asks if he can move back in with him.

At Nate’s house, Jeannie and Nate commiserate over exes; Nate’s sends him a Christmas every year, which he explains away as her need for closure. But I don’t think anyone who sends an wedding invite addressed to Cunty Cunterson with “Eff you whore” written on it–like Jeannie’s ex–is trying to hold hands and sing Kumbaya. No wonder she was in a grumpy mood. She then confesses to Nate she tried out his product, and was, for lack of a better word, impressed. The two flirt a little more, then start making out.

Roscoe and Marty come home to find Malcom and few other random folks in the living. They have names, but they won’t be staying very long, so no need to get attached. Malcom pushes for Marty to talk to a big reporter about his attack, but he must talk to him soon. True to form, Marty to tells everyone to get the hell out, as he’s not interested in being anyone’s poster child. Jeremiah scolds Marty for pushing his brother away, saying Malcom is trying to make a connection, which I don’t entirely believe. If Malcom really cared about his brother’s well-being and really felt it was important he speak out, talking to him one-on-one and showing some genuine concern would have gone over better than bum rushing him with a bunch of strangers sitting on his couch. Though Jeremiah may have a point when he says Marty needs to use the incident to re-evaluate his life.

In the middle of their talk, or Marty snidely says to Jeremiah, “a session,” Tamara calls. Apparently she’s in Las Vegas with Carlson, who’s having a meltdown over acquisition targets and wants Marty in Vegas now. Marty says it’s not a good time, but Tamara advises him that blowing an $80 million account will kill any hope of starting his own business.

Clyde and Doug bust Jeannie for sleeping with Nate, then trade barbed insults, back-handed comments and sarcastic retorts. You know, the usual. All is well, at least until they get a good look at Marty’s face. He laughs it off and the guys sit down. Marty tells Jeannie he was attacked, and tries to keep it light by switching the subject to her dildo adventures. He succeeds until Jeannie confesses she likes Nate, which causes him to clam right back up. Cut to a meeting with Carlson, who’s ranting about the Grand Canyon or some shit. Marty asks him about the acquisition targets, but Carlson says he’s over that, and goes back to living in his own world.

Marty and the Pod resist the string his carcass across a black jack table and go gambling instead. Marty puts a big bet on the table, then leaves Clyde to throw the dice. He goes to a hotel room. Is it Jeannie’s? Nope, it’s Tamara’s, and well, you know what happens once the door closes.

It’s not a big surprise Marty ended up at Tamara’s door, since any chance of something happen with Jeannie seems to be closed–the key word being seems.  Perhaps subconsciously, Marty took Jeremiah’s advice; Tamara knew him before he became “Marty Kahn” and isn’t afraid to challenge him and push him to be a better man, or at least the man he once aspired to be. They’re similar in age and status, which means there isn’t the whole mentor/protege/daddy issues dynamic that pops up between him and Jeannie. On the other hand, it’s not impossible to imagine he and Jeannie as a couple, being that they’re both so alike. They’ve both lived through crappy childhoods, are ruthlessly ambitious, and are self-aware enough to know they are deeply flawed because of it. All of this is to say things are about to get a lot more complicated.