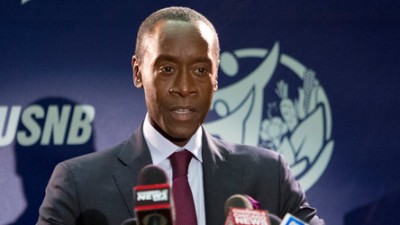 As always, spoilers lie ahead…In the last two episodes of House Of Lies, we”ve seen Doug stand up to Clyde, Doug”s girl Sarah tell Jeannie to back up off her man, Julianne tell Marty in no uncertain terms to “know his place” at Galweather, Tamara revealed her marriage is pretty much over, Marty learn that his father may soon be having surgery, and Marty drop the bomb that he was leaving the agency.

Save for that last revelation, this week”s episode “The Runner Stumbles,” didn”t move any of these plot lines forward. At least on screen away. Leaving Galweather, Jeremiah”s Parkinson”s, Tamara”s invite to go to bed,  Jeannie and his blackout antics–they”re all playing on repeat in his head. Why else would he go running, since we”ve never even so much as seen Marty do a pushup until now? If we have, please correct me, but the point is Marty isn”t exactly a P90X disciple. Anyway, movin” on.

Speaking of Jeannie, the sole female of the Pod has a surprise for our boys. It turns out she and an ex-boyfriend created a sex tape, long ago when she was in the midst of a goth phase, and said ex posted it when she refused to become a Facebook friend. Talk about overreacting. Anticipating that someone would find it and show it to the Pod, who would in turn mock her mercilessly, she offers to show them the video for a one-time only shredding of her self-esteem.

The guys are ecstatic to say the least, but Marty decides to walk out, saying the build up is never as good as the real thing. Or maybe it”s because he”d rather not see the woman he told he loved her go down on a guy whose junk has more holes in it than a pound of Swiss Cheese. Let”s just say Lonnie liked to get pierced…a lot. Even Clyde and Doug are bored by the whole thing, and lose interest, which pisses Jeannie off. I mean, if your co-workers won”t watch your amateur attempt at porn stardom, who will?

On the flight to Chicago to meet with U.S. National Bank and it”s clueless leader Carl Criswell, Jeannie”s having trouble getting through one of the bank”s firewalls. She chants “Marty, Marty, Marty (think Stewie Griffin saying “Mommy” over and over again) until he, trying to sleep, asks Clyde to help her out. Cut to Clyde criticizing “goth Jeannie” for being too bossy in bed, and Doug causing everyone”s insides to rupture by talking about he and Sarah”s sex life. Jeannie, curious as to why Marty didn”t want to take part in witnessing her porn debut, asks him why, then goes all “Marty, Marty, Marty” again when ignores her.

But back to the firewall. Some girl who has a crush on Clyde–Cinda from IT to be exact–gave him the bank”s firewall password. It turns out U.S. National has been doling out “ghetto loans,” meaning white customers receive the good loans with low interest rates, but black and brown clients get conned into getting what they think is a reasonable loan, before the bank swaps out low teaser rates for sky-high ones, a.k.a sub-prime loans, regardless of their financial status. Basically systematic racism 101, but you get the drift.

Marty meets with Brynn, who tries to patronize Marty by saying he was a smart “boy (anyone else pick up on that?)” to find the paper trail. Marty, having graduated from kindergarten, sees through that crap and points out she wanted the Pod to find it. And more importantly for Marty, the successful corporate shill and possessor of melanin rich skin, to soften any potential scandal by reassuring the public Carl Criswell is not a racist. Brynn give him the “it”s just business” spill, but Marty”s reached his breaking point and storms out. On the street with Jeannie, Marty rants about people”s perception of him and selling his soul, but then hilariously and sadly points out “you can”t sell something you rent.” Then he lets Jeannie know he”s leaving Galweather, and insinuates that she can have his job, before telling her porn clip “transcended the genre.” Awww.

The next morning, Marty meets with Brynn and Criswell to talk about the ghetto loans. Marty, still angry, even mentions call the Justice Department, but they blow his threats off, and bring up how getting U.S. National as client would make Marty Julianne”s go to guy. But Marty doesn”t want to be Julianne”s go to guy,  or anyone”s for that matter, since he”s starting his own firm, Kahn and Associates. And Marty wants U.S. National to be his first client, both so he can hit the ground running and so U.S. National looks like they actually give a crap about black people by supporting a black-owned business.  Upon hearing the news, Brynn says “okay” in a tone that screams “ahh, the ruthless shark I banged in my office

is back!” while Criswell takes about three or four more trips around the mental merry go around before he finally gets it. Marty turn to the camera in disbelief at the chance this “fuck nut” might be president some day. Sigh.

The Pod finds some legal loophole to get Criswell out of any responsibility for the ghetto loans, and a fall guy to take the heat and public scorn. Jeannie, witness to what seemed like Marty”s moral awakening, asks him if he truly realizes what he”s doing, but he blows her off with his best tough guy PR spin. However, at the press conference, Marty”s inner turmoil keeps bubbling up. He gives the prepared speech, but judging from the his self-loathing looks and way he struggled through it, sleeping may be hard for the foreseeable future. On the plane, Jeannie warns him that he can”t do what he did at the conference and walk away unscathed. It”s unclear whether she”s talking about business or his emotional well being. More likely the latter.

Marty arrives home to find Malcom comparing himself to Malcom X, and, likely due to the day”s events or because his little brother of full of it, cuts him down the size. Yea Malcom”s just like Malcom X, minus the talent, personal struggle or charisma. The two trade barbs about Marty being soulless–and lacking a decent wine collection–before Marty takes off for another run. This time though, he gets stopped by a black and white cop, for no other reason it would seem than JWBWAH (Jogging While Black With A Hoodie). Marty drops a few F bombs, but has enough when one of the officers asks if he has a weapon on him. Marty pushes him away, and proceeds to catch a beatdown.

This episode has gotten mixed reviews by fans, and I”ll admit on first viewing that the whole racial profiling scene felt heavy handed (particularly the hoodie–last week was the one-year anniversary of Trayvon Martin”s death, a fact that would”ve been pretty hard for the creators and cast to overlook). And I might be tripping, but was Marty smiling at one point during his beatdown? Some self-flagellation for making a deal with the Devil perhaps?

In fact, the whole episode would”ve felt inconsistent if we hadn”t already been getting signals–Tamara insinuating Marty”s lost a part of himself, Malcom say he”s a sellout, the realization he has no real power at Galweather–that Marty”s big internal conflict this season would be keeping, or this case reclaiming, his integrity and independence or offering it to the highest bidder. In deciding to strike out on his own, he”s made a step toward independence. Though deciding to fund his business with what amounts to little more than blood money doesn”t give much hope for his integrity.