House Of Lies Season 2 Ep. 5 Recap: 'Sincerity Is An Easy Disguise In This Business' 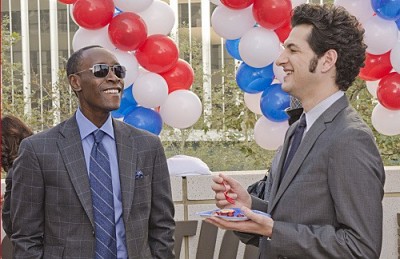 As always, spoilers are ahead…This season House Of Lies has been all about the celebrity cameos. First there was Nia Long as Tamara, Marty”s business school classmate/ex-girlfriend. Then there was Matt Damon, amped up on insanity steroids in last week”s “Damonschildren.org.” Now Larenz Tate has popped up in the proceedings as Marty”s younger brother Malcom.

The episode opens with a clip of Malcom holding court at what looks like a pretty pathetic/staged Occupy Wall Street rally, including a dude in his underwear who can”t, in Malcom”s words “afford a pot to piss in.” Cut to the Kahn men having dinner at a restaurant, with Jeremiah praising his youngest son”s activism, and Roscoe being fascinated by tales of “conversations” (i.e. a single retweet) with Cornel West. Though Marty shuts down any chance of Roscoe living in a tank community, or as he refers to it, a “rat infested candy shop for pedophiles.”

As to be expected, Malcom”s rebel philosophy clashes with Marty”s where them dollars at mentality,along with their general successful older brother/younger freeloading brother dynamic, and the two trade barbs about Marty”s tap dancing at Galweather until Jeremiah, no doubt having been in this situation more than once, stops them. Marty notices his dad”s finger twitch–and obvious call back to his confession of Parkinson”s disease last season–and asks if he”s okay. Jeremiah changes the subject and offers to pay the bill after Malcom”s long stare at makes it clear the revolution will not be monetized. Marty snatches the bill and two snipe at each other some more, until Malcom one ups him by order something to go. Fight the powers that be indeed.

The next day the Pod is taking a survey for new client Cupid Chemistry. Marty”s already flew through the questionnaire by virtue of not giving two craps, while Doug of course is all about analyzing every question to the nth degree. Julianne calls Marty out of the room and tells him he needs to go to Chicago to land US  National BBank, and suggests

he take along Tamara, which he quickly shoots down. Hmmm, what was that part about him not feeling threatened again? He goes back into the room and informs the rest of crew they”ll be splitting up. Jeannie immediately assumes she”ll be heading to Chi-town, but is pissed, and perhaps despite her best efforts, feels slightly betrayed when he opts for taking Clyde instead. Obviously she”s still hung up on their night out at the end of last season, and Marty decision”s isn”t helping ease any fears that things won”t stay at least a little awkward between them.

Once in Chicago, Marty and Clyde meet bank CEO Criswell, a tightly wound weirdo whose father wants him to make a run for governor, despite his son possessing no political savvy whatsoever, if waving zucchinis around and making racist Michele Obama and athletic references is any indication. Fortunately he”s got a secret weapon in his consultant Brynn, who earns some approving looks from Marty with lines like “politics isn”t theater, it”s performance art.”

Meanwhile Jeannie and Doug fly to San Diego. Doug”s jumping into the whole online dating thing feet first, and made profile that includes the caption “You can thank the Second Amendment for these guns,” under a picture of him working out, which has officially replaced “did you get tickets to the gun show” as the lamest way to let someone know you work out. But hey, a profile named Sarah, who is 94 percent match for him, must be thankful Doug has the right to bear arms. Ugh, now I”m doing it.

Anyway, Doug pushes Jeannie to go out with her match, Cameron The Kung Fu Lover, as he will henceforth be referred to for the rest of this recap, and correctly psychoanalyzes the her relationships with Marty, The Rainmaker and her ex-fiancee as ones driven by a need for control and to get ahead. Which is why her feelings for Marty terrify her, as they are most definitely out of her control. She takes Doug”s advice–as well as a free shot of tequila from a friendly gay working behind the bar–and goes on a blind date. Things go well at first, as Cameron The Kung Fu Lover reveals himself to be a well-adjusted kindergarten teacher who is a big brother to a kid named Frederick Douglas. Nice, whimsical shout out to Black History month guys.

Things go south though when Jeannie”s assumptions and cynicism get the best of her, as she asks why he trolls the Internet for “desperate vag” and worse, makes light of his big brother status. She”s so blind to his change in demeanor that she gets all emotionally slutty and reveals cheating on her fiancee with the Rainmaker. Even her choice of words–frat boy fiancee, creepy Mr. Burns boss (though I”d be hard-pressed to argue with her on that. I can almost hear him sighing “Egggg-cellent after each of their little trysts)–show how hardened and closed off she is compared to Cameron The Kung Fu Lover, who abruptly gets up and says he”ll pay for his tab at the bar. Pissed both at Doug and probably herself, Jeannie storms up to his room to find Doug”s Sarah is not a nightmare creature and that the two have shared a very pleasant evening together.

The same could be said for Marty and Brynn, who dismisses Clyde as driven, oversexed bonehead and sees a kindred corrupted soul in Marty. The two turn talk on the insincerity of sincerity into foreplay, and making out and groping various nether regions commences. Then Brynn drops a bomb: Julianne wanted US National Bank”s business, but she wanted another consultant–Tamara perhaps?–to helm the account. Marty is of course livid at learning this little tid bit, but it doesn”t stop the sex train from rolling full steam ahead. The bad news? Julianne has declared psychological war. The good news? Brynn might be Marty”s new hate sex partner.

Coming home to his apartment, Marty finds Malcom on his couch, drinking his 30-year-old Scotch, laying up on his sofa and eating pizza. Not in the mood to be political, Marty asks Malcom what he wants, and they to lay into each other again, with Marty calling Malcom a phony who”s been manipulating their father for cash, and Malcom calling Marty, a.k.a. “Martin” a sellout. There may be some significance in each brother being named for a civil rights icon, but since Malcom is focused on not growing up by any means necessary and Martin”s is closing big money deals for what are often heartless clients through non-violent bull shitting, they don”t exactly embody their surnames.

Malcom reveals their father was in a bad car wreck and is considering going in for deep-brain stimulation treatment. Neither of which Jeremiah told Marty about. Yeah, it”s officially been taken there. Marty fires off a final quip, telling Malcom to “use a coaster motherfucker” for his drink. but the look on his face as he walks to his bedroom shows the damage has already been done.

I”ve enjoyed the season so far, but it”s been long on comedy and gags and short on the dark, emotional moments of season one. It”s nice to see that “real life” may be crashing into Marty”s world again.