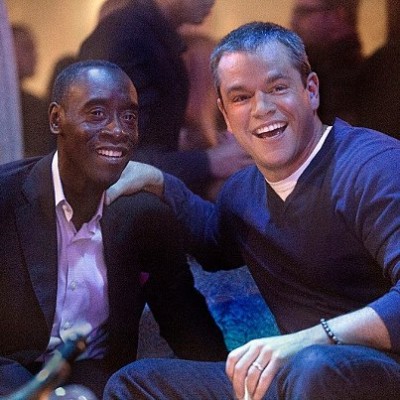 As always, spoilers lay ahead… After taking a break last week for what I assume was to avoid the ratings slaughter that was Super Beyonce Bowl Sunday, House of Lies is back, and bringing some major star power in the form of Matt Damon, who is playing himself. Well, at least an over-the-top, insane, Neil Patrick Harris as Neil Patrick Harris in Harold & Kumar Go To White Castle version of himself.

We begin at the office, where Doug is spazzing out as usual, and Clyde is telling to him to shut up in his own colorful way, as usual. This time it turns out Doug is babbling for a good reason: Matt Damon, yes the Matt Damon wants to start a charity, and, as it turns out, his business manager knows Julianne, so the Pod gets a shot at the business. Clyde and Marty aren”t quite as psyched as Doug, with the former saying they”ll handle Matt like they”d handle any other actor; let him talk and pump up his fragile ego by giving him the love and approval he so desperately craves. Nice in-joke. Doug, lost in his fanboydom, believes otherwise. Of course, since it came out of Doug”s mouth, we know he”ll be proven very, very wrong.

The meeting starts off with much fawning over Matt, who at first glance acts and speaks like his off-screen persona. An over-excited Doug launches into his presentation, which Matt proceeds to ignore like any normal human being, asking Marty where he got his watch and proclaiming himself to be a swag whore who loves getting free stuff. A little off-putting perhaps, but nothing most folks wouldn”t admit to. However, his inner sleaze comes out more when he motions to Jeannie and asks Marty if he “hit that,” to which Marty honestly replies he doesn”t know.

Alpha male recognizing alpha male, Matt lays it on the line: he wants a charity that”s bigger and better than George Clooney”s, one that”s sexier than talking about water and dying African kids, because really, who cares about that? Matt just wants to rock a beard, shoot a M-16 and basically film a spot that looks like he”s fighting for blood diamonds rather than clean water. Awesome in theory? Yes. But vacuous and idiotic in reality. No matter, “cause what”s on Matt”s mind now is going out and raging with Marty, who unfortunately, already made plans with Roscoe that he”ll now have to worm his way out of.

Speaking of Roscoe, he”s sitting in the office waiting on Marty when Jeannie walks in and earns cool points by

complimenting him on his Janoski sneakers. Roscoe”s stare lingers when she leaves, almost long enough to make you think he may have a crush. Marty comes and starts to tell Roscoe about the change in plans, when Roscoe says he wants to go to the batting cages with his friend Dylan, his “homeboy who”s epically bad ass.” Riight. Taken a bit aback by this decidedly butch activity, Marty also picks up on his son”s interest in Jeannie and pawns him off on her while managing to stay in his good graces. This is in part because Marty”s master at reading body language, but also because Roscoe”s savvy enough to know Jeannie is the type of woman Dylan would lust after.

Unfortunately, his plan works a little too well and Dylan focuses all his bad pick up lines and pre-teen boner on her, ignoring Roscoe, who obviously has a thing for him. Aah, crushing on the douchebag straight boys. Been there, done that. Anyway, Jeannie tells Dylan in no uncertain terms to back the hell up, earning Roscoe”s respect, later telling him he”s great and Dylan would be lucky have him as a friend, or whatever. Then the two hug.

Too bad Marty”s night wasn”t as affirming. Matt Damon reveals himself to be an insufferable narcissist, one is astute enough to realize that people see the version of him they want to see, and uses it feed his ego. Oh, and to torture Marty by slapping him on the back of the head and getting him punched in the face by beefy bodyguards. Finally, Marty”s had enough and lights into Matt, telling him he”s a total hypocrite and that the bullshit he spits is most impressive. Considering the ”the wholesale quantities of bullshit” Marty deals with and dishes out, that could be taken as a perverse compliment. At least if Matt hadn”t tuned him out and ran off with some girls.

The next day, Matt”s running late and the Pod is shocked to learn Marty told him off and may have offended Mr. Sensitivity himself. Poor deluded souls. Jeannie reminds him of the importance of the deal and the press it would give the firm. Matt arrives and it quickly becomes clear he”s loaded out of his skull, so Marty clears the room and tries to talk some sense into him, but to no avail, Vicodin being a hell of a drug and all. Matt tells him they can close the deal if Marty engages in a little skulduggery, a.k.a. a blow job. Marty, too through with this craziness, kicks him out again. Matt actually seems to find his conscience and apologizes. But then says they can seal the deal with a hand job. Marty glares at him like he”s mental, but then gives the camera a “why the hell not” look.

Cut to a ridiculously overblown ad for Damonschildren.org, with explosions, guns and nuns thrown in the mix. Filming ends, with everyone singing the praises of Matt Damon while clad in Damonschildren.org T-shirts. Of course no (I”m assuming, unfortunately) good deed goes unnoticed, so as Matt walks toward Marty he makes the hand job gesture. All in a day”s work.

In Monica news, she and Tessa are having fabulous sex–all those slow-motion shots of bedsheets made them look like they were in the middle of a Calvin Klein ad–but Monica”s more interested in getting off and taking a post-coital catnap than talking

about feelings. Let”s see how long that lasts.