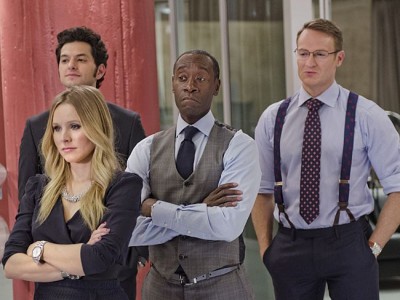 As always, spoilers lie ahead. Proceed with caution..

In case you forgot where we last left our ruthless foursome, a quick recap (a recap within a recap? So postmodern, I know:): After being stabbed in the back by his friend (or as close to a friend as he had) the Rainmaker, Marty”s and the Pod”s future at Galweather Stern looked nonexistent. That is, until Jeannie confessed to having slept with said Rainmaker for the promise of a partnership, causing other female employees to come forward and killing the merger that would have cost them their jobs. Marty got the final tee hee hee by telling the Rainmaker he slept with his

daughter, Jeannie broke up with her fiance and both of them took shots as a fitting toast to the life blower uppers–i.e., Jeannie and Marty. And scene.

The season opener “Stochasticity” finds Marty and the Pod two weeks removed after everything went down. Jeannie, fresh off a two week paid vacation suspension after her, in the words of Clyde, “Sluticus” confession, runs into Marty on their way into the office. After giving a quick rundown of how crappy her life is at the moment–no man, no fabulous apartment, and chlamydia–she tells him she can”t remember anything that happened that night. Which of course means she can”t recall if they did more than trade shots. Marty at first gives the her the “let”s talk about

this later” brush off, probably because any conversation not revolving around work is awkward for him. Oh, and because he can”t remember either.

They trade a few barbs with Clyde and Doug–who inform Jeannie an office pool has been started on whether her and Marty did get down with the get down. The Pod has bigger challenges to face though. Interim CEO Julianne Hofschrager wants to create a new corporate culture that empowers women. The first step being a new title for Jeannie, who recognizes the “don”t sue us promotion” for the empty gesture it is. Blackout or no blackout, you can”t fault her for not spotting a phony when she sees one. Judging her from her no nonsense demeanor, I”m willing to bet Julianne and Marty will bump heads.

Hofschrager not only wants to put the sex scandal behind the company, she also needs Marty to close new business like a motherfucker.Unfortunately for the gang, their first client, Mr. Pincus, is one they know nothing about. They manage to BS him long enough before Doug spectacularly bombs by going on some long tangent about stochasticity. Fortunately they keep him from hanging up long enough to schedule a face to face meeting. Problem temporarily solved. Jeannie opens up a bit to Clyde over her broken engagement, and he offers his own special brand of support; that being she gets to bang whoever she wants now. At least he sounds supportive until he asks if one of her new banging partners is Marty. Classy. As much fun as it is to have Clyde and Doug as comic relief, I am starting to wonder if we”ll ever go deeper with their characters. Doug for one has gotta have some geeky and/or creeptastic quirks trolling around in his closet.

Marty leaves to have lunch with Roscoe, who left to stay with his mother at the end of last season. He looks healthy and shows no visible signs of abuse, good omens considering who his mom is. Roscoe rightly reads Marty for filth for putting him in the position of having to parent himself, until a woman dressed as bumblebee asks if there”s a Carpenters fan at the table. They look at her like she”s on crack until she starts singing, with Roscoe eventually joining in and actually enjoying his dad”s company for five minutes.

Marty drops Roscoe off, and the two have another good moment when Roscoe tells him he was hip to the bumblebee Carpenters surprise. Once he leaves and Monica appears, Marty wastes no time asking in no uncertain terms what the hell is up, suspecting her vegan, emotionally stable mom makeover is one big custody play. She points out that Roscoe is already living with her, so there”s no need to hatch a plan, and says she”s trying to turn over a new leaf. Marty (and me) are highly skeptical, and we”re both almost proven right when the two of them start their whole S&M hate sex routine. But lo and behold, Monica practices restraint and kicks Marty out. Maybe there”s hope for sociopaths after all.

Being turned down by Monica must have stirred something in Marty, as he meets Clyde and two girls at the bar and almost rains on their little menage a trois parade by talking about relationships and feelings. Back at the office, the crew still knows zilch about Mr. Pincus (did anyone else just pick on The Golden Girls pilot reference?), in spite of Doug”s “I slept seven hours” all nighter. All seems lost until they manage to pull in person what they could not on the phone–a blitz of fear, manipulation and patronizing that causes Mr. Pincus to finally give up that he runs a casino. Vegas baby Vegas!

But back to the Marty/Jeannie blackout. Both have flashbacks throughout the episode, with memories of sidewalk peeing, the running man, pushups, simultaneous vomiting and Jeannie punching Marty in the face cropping up. At this rate Marty has Don Draper beat for the “I like it rough” crown.  But alas, no recollections of coitus. Though when the gang”s at the bar celebrating, Jeannie remembers doing something far worse. She told Marty she loves him. They may not have had sex, but Jeannie”s totally screwed.