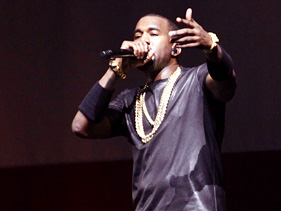 Kanye West maybe following up Cruel Summer, the hotly-anticipated deubt album by his G.O.O.D. music crew due out  August 7, with another solo LP.

“He’s coming right after that,” Chicago producer and Def Jam VP No ID  told MTV News recently. “It’s what you expect and everything you don’t expect.” If No ID”s right, the new album will be Kanye”s first new album of solo material since 2010″s critically-lauded My Beautiful Dark Twisted Fantasy.

The timing is de

finitely right for more music from the Louis Vitton Don, as his appearances on the “Way Too Cold” and Chief Keef”s “I Don”t Like” to G.O.O.D. Music”s  “Mercy,”  have all been smash hits, with “Mercy” being certified platinum last week. Yeezy also provided assistance to Pusha T on “New God Flow.”

Being that Kanye changes things up musically each album, so you can never be sure what to expect. His debut The College Dropout was loaded with speed-up soul samples, while 2005″s Late Registration was an exercise in ornate orchestration with producer Jon Brion. His third release Graduation ditched the strings, harpsichords and horns for 70″s rock samples and synthesizers, and “08″s 808″s and Heartbreaks dove headlong into Auto-tuned electro iciness. Ye” tore up the rule book for My Beautiful Dark Twisted Fantasy, combining a Heartbreaks” processed vocals and emotional vulnerability with the over-the-top sound and soul samples of Dropout and Registration. Where he goes next is anyone”s guess.