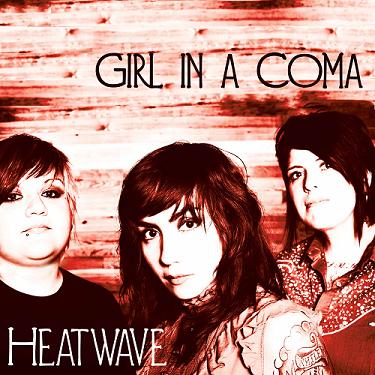 Girl In A Coma cover a Motown classic and gear up to hit the road for a North American tour. More details, as well as the song, after the jump.

The trio released their cover of Martha and The Vandellas 1964 smash “Heat Wave” on Tuesday, and the song, currently available on iTunes, has been picked up by JCPenny as part of their July national ad campaign.  The group channels a bubbly pop-punk energy with chugging guitars and snappy drums, while the vocals stay true to the  head-over-heels-in-love feeling of the original. It”s almost makes you wonder why The Go-Go”s never took a crack at the song back in their early 80″s heyday.

Girl In A Coma are also kicking off a North American tour that will keep them out on the road until August. The tour kicks off July 9 in St. Petersburg, Florida, and will hit Philly, D.C., Chicago and St. Louis before wrapping i

n Pharr, Texas on August 16. The upcoming road trek is to promote their lates album Exits & All The Rest.

Listen to “Heatwave” and view the band”s tour dates below.