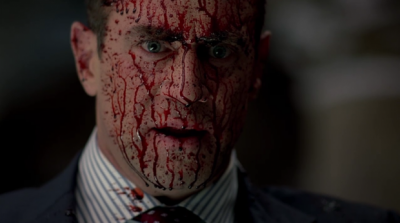 As always, spoilers lie ahead. There will be no opposition to our just cause…

The reality of impending death often makes one reflective, and, as Alan Ball has hammered home to us time and time again over the last five seasons, vampires, weres, shifters, and other creatures of the night aren”t any different than humans when staring headlong into the darkness of their own obliteration. In “We”ll Meet Again,” it seemed all of the bloodsuckers we”ve come to know and love/loathe/lust were either leaving the nest, starting to build their own, or marveling at how much the kids have grown. You know, new bonds being strengthened, old ones being broken and all.

But first, let”s tackle what could”ve been this episode”s subtitle: Everybody Hates Sookie (cue Everybody Hates Chris theme song. Or snap your fingers to a little Everybody Loves Raymond jazz licks if that”s more your style). Anyway, in the last three episodes, Sookie has manage to get on the bad side of Tara, Alcide, Arlene, Holly, Andy, and pretty much anyone who isn”t a blood relative (which at this point leaves just Jason) or hasn”t come into contact with her for more than five minutes (Jessica). Now Lafayette can add his name to list, after Sookie tried to pull one over on him about Alcide already knowing she killed Debbie and failing miserably, just as she did when she tried to play dumb about Tara”s transformation.

Girl don”t you know? These are Lettie Mae and Ruby Dee”s kids. They”re super sleuths at sniffing out bullshit. And what you”re pushing is the Grade A USDA kind. Lafayette proceeds to read Sookie”s “peach pie ass” for filth, reminding her of all the times her covered for her but couldn”t count her when the tables were turned. Calling her “the angel of death” was the cherry on the sundae–I guess she and Sydney Prescott have that in common. Sookie tries to put on her strong face at work, but everyone”s judgmental thoughts overwhelm her. It doesn”t help that Lafayette, still pissed over her betrayal, unconsciously summons Jesus”s brujo magic and goes all Christine on her ride, turning the car into a self-accelerating death trap.

It”s enough to make a girl get plastered, which is exactly what Sookie does once she gets home. Her decision to get liquored up is unexpected, but not totally unsurprising; given all of the supernatural insanity and near-death experiences she”s lived through since Bill walked into Merlotte”s that first night, it”s a miracle she doesn”t have her fingers permanently wrapped around a brown bag. Lafayette calls to both see if she”s still alive and tell her his dead boyfriend”s dark magic possessed him and made him want to kill her (talk about awkward), but a drunk Sookie slurs she”s fine. Besides, she”s got Alcide to comfort her. Plus he cleared her name by telling Debbie”s parents she was killed by Marcus, who”s conveniently can”t corroborate because he”s dead too. Alcide has every right to be angry with Sookie, but perhaps the half-confession softened him up by making Debbie out to be an innocent victim instead of a shotgun-wielding killer amped up on V, he both preserved her parents” memory of their daughter and sullied his own reputation, since he promised them he would die to protect her. He did what he thought was right and he”s hated for it. Maybe he can empathize with Sooks”s situation.

Either way, one drink leads to another, which leads to friendly teasing, which leads to making out on Sookie”s couch. Seriously, what supernatural male hasn”t had a dry humping session on that sofa? Unfortunately the camera cuts away before we get any shirtless Alcide action, which I hope they pick up with next week–they better not deny us this moment like they did Pam and Eric”s consummation. It”s just as well, as Bill and Eric are watching the whole spectacle and are none too pleased. Prompted by Jessica to check up on Sookie, the two, particularly Bill, are still fixated enough on her to

stop by. The sight of the big bad wolf”s paws all over her drains whatever concern they may have had. They still need to find Russell Edgington to save their own skin though, so Sookie could prove useful, whether she wants to be or not, Bill says coldly. It”s watershed moment in the trio”s relationship.

Of course, Bill has Tara to thank for his new attitude. She may not be speaking to her cousin, but she and Lafayette have the same feelings about Sookie; that she”ll always survive whatever calamity comes her way, but only because there”s always someone willing to take a bullet, or dump a dead body or walk in the sun or threaten to kill their beloved progeny for her. The angel of death will take whatever she can get.

Then again, the supernaturals–well the full-fledged supernaturals anyway–seem to be closing ranks, turning to each other for emotional comfort. For Bill and Eric, who are may be staked at any moment, this means setting their children free. In a touching scene, Eric, after heated fight in which he accuses Pam of setting Russell Edgington free, recognizes that this may be end for him, and wants her to leave him, so that their bloodline can continue. It”s a key moment for Pam as well; she could”ve chosen to cling to Eric and remain the bitchy side-kick, but instead recognizes it”s time for her to grow up. No longer belonging to anyone, she can now be a better maker to Tara, commanding her to put a stop to her suicidal tendencies and schooling her on the ins and outs of dining on humans. Ahh, they grow up so fast.

The maker-progeny connection is alive and well in Bill and Jessica as well. When he holds her face in his hands before leaving his mansion, he almost looks like a proud father getting ready to walk his daughter down the aisle. Though it”s notable that Bill doesn”t tell the whole truth about his situation the way Eric does with Pam; then again, their relationship has always been strictly father-daughter rather than lover-father-daughter. Salome may not have made Nora, but the way she holds her after swearing a blood oath shows their relationship has been a mentor and protege one as well. Though I doubt she could save the young chancellor from meeting the true death if push came to shove; Roman staked the boy-vamp sanguista traitor at a council meeting like he was making A positive shish kabobs. Someone clearly doesn”t love the kids. Not to mention the sight of Chris Meloni”s face splattered with blood was one of the most genuinely creepy moments True Blood has had in a minute.

The fairies are intent on protecting their own kind as well. Last week I moaned about the return of the Tinkerbells. But if the new storyline involves more trips to the fae burlesque bar (choreography! Cirque Du Soleil! Private lap dances!), bombshells that Jason and Sookie”s parents were killed by vamps and blasts of white light to the face when Jason and Andy get rowdy, things may be alright after all. This isn”t any season four, second-rate SyFy channel outakes stuff; these fairies aren”t messing around. In shape-shifter news, Sam”s story line took a mysterious turn when, after his old shifter buddies show up at Merlotte to invite him out to a group therapy session, he discovers them dead with bullet holes in their skulls later that night. Could it be more werewolf trouble? Marcus”s mama on a psycho killing streak? It”s hard to know who”d in Bon Temp would go on a rather shifter-killing spree at this point. But hey, it beats sitting through more heart-to-hearts on Luna”s lumpy couch.

In human news, we finally get the full story behind Terry”s Iraq War flashbacks. Apparently he and the boys decided to tie one on by drinking and popping….well, let”s go with shrooms. That”s trippy enough. While admiring the bombs bursting in air, Terry and Patrick”s former buddy turned arsonist shoots an Iraqi civilian, leading to a bloodbath that ends with what looks like an entire family”s corpses laid out on the ground. And judging from the padded cell-worthy wall sketches and his greeting at gun point, this guy doesn”t seem all that big on listening to reason. Hoyt was no where to be found, but until they give him a new emotion to work with I don”t see the point of giving him screen time.

So what did you think of “We”ll Meet Again?” Discuss.