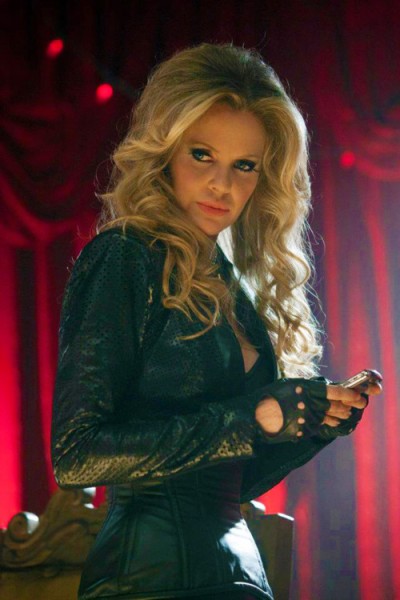 Just like last week”s recap, spoilers lie ahead. So either be an honorable vampire or an intelligent whore. Your choice.

This week”s episode, “Whatever I Am You Made Me,” threw the rarest of curveballs in the True Blood universe: choosing plot development and emotional revelations over the usual gore/sex shenanigans. All of which made for a subdued–at least by True Blood standards–but entertaining, night in Bon Temp.

Tara, still pissed at Lafayette and Sookie for turning her into the creature she despises most, dashes out of her former best friend”s home, but not before getting doused with a face full of silver spray mist. Walking through the woods dazed and temporarily blinded, Tara takes a moment to marvel at and silently freak out about her new healing abilities and the way everything looks so shiny and pseudo-psychedelic. One thing that she hasn”t gotten a taste of is blood, and she almost finds her snack for the night when she spots a young girl having car trouble.

Is it just a coincidence her car looks nearly identical to a certain hoopty and her clothing and hair are screaming season one Sookie? Me thinks not. Anyway, the girl”s resemblance clearly resonates with Tara, who catches a glimpse of herself in the mirror, recoils in horror, apologizes to Sookie 2.0 and speeds off. Still starving, she ends up scaring the hell out of Sam when he finds her hiding in the bushes at Merlotte”s. After plowing through most of his True Blood stash, she passes out, and he hides her in the meat locker, a place that held its share of dead bodies–Daphne”s for example–and secrets. Remember Jason”s nether region nightmare when he took V and tried to cool himself down with a pack of cold meat (and remember it was Tara who helped him? It”s also where Pam once quipped she could “sleep in a pinch,” before telling Lafayette to sell vamp blood.

But back to Tara. She wakes up from a nightmare/fantasy of ripping out Arlene”s throat to find Lafayette holding out a bottle of True Blood and instructing her to drink. Tara being Tara, she”s still livid and nearly break”s his arm, causing Arlene (whose throat is still in tact thank you very much) Sam, Sookie and Alcide to see what the commotion is all about. Sookie makes a lame attempt to play stupid about why her best friend is walking out of a meat locker covered in blood and baring fangs, but Tara won”t let her off the hook.She and Lafayette made this mess, and now they have to live with the consequences They may have thought they were doing her a favor, but Tara is conflicted, bloodthirsty, miserable, and utterly guilt-ridden about impulses that feel both natural and monstrous to her. In short, she”s baby vampire Bill. After telling everyone to go to hell in no uncertain terms, Tara walks the streets alone until she happens upon tanning salon. Still not adjusting to her new life, Tara decides to bring vampire suicide into the 21st century and forgo a stake for a tanning bed”s UV rays. Pam feels her progeny”s pain, but instead of rushing to her side like Bill or Eric would do for her or Jessica, she merely rolls her eyes and says “stupid bitch” in her trademark sardonic snarl.

Perhaps Tara wouldn”t be so buck wild if, as her maker, Pam actually gave a damn about her. It seems to be the one lesson she hasn”t gleaned from Eric. Still wondering where her maker is, we delve deeper into Pam”s human past, as Eric pays a visit to her brothel to sample her merchandise. She declines at first, then thinks back to the site of one of her girls lying dead after being killed by a vampire. This leads to Eric busting in on Bill and Lorena glamouring and draining a girl dry. Who knew the three of them went back like babies and pacifiers? Speaking of babies, clearly Bill was in a savage, infantile state when he and Eric first crossed paths, as he foolishly tries to stake Eric and has no knowledge of vampire stalking ground etiquette and respecting your elders.

After Pam and Eric have sex, she presses him to turn her and then leave, anything to save her from suffering the stigma and disease of being an aging prostitute. Of dying alone. He lectures her about the supreme responsibility that being a maker entails and says leaving her would be like dumping a baby in a gutter. All of which leads to the episode best lines: “An honorable vampire? Isn”t that a contradiction?” “No more than an intelligent whore. Yet here we are.” Eric shoots back. Little did he know that Ms. Pam had a trick (more like a powerful death wish) up her sleeve, slicing her wrists and giving him an ultimatum: turn me or watch me die.

This was one of the episode”s best scenes for what it reveals about Pam and Eric”s relationship. I don”t know about anyone else, but I always assumed that when the two met Pam charmed Eric with her femininity and icy charisma–that she basically acted like a vampire sans the fangs and super speed–and that he gladly turned her during some lustful sexfest. But her decision was an act of desperation, a desire to escape a dead-end existence; no wonder she takes a trip down memory lane after telling Hoyt, looking pitiful in dime store eye-liner and fishnets, that he”ll get eaten alive in Fangtasia and he responds “that”s what I”m hoping for.” Maybe all of this reminiscing will inspire some

empathy for Tara”s plight. In other Pam news, Sookie totally owned her in her own club by blasting her with fairy dust. Sorry girl, I love you, but I calls “em like I sees “em.

In other vampire business, Eric and Bill have convinced Roman to let them find Russell Edgington and bring him to the Authority, lest he lead a sanguista revolution and undo all the hard mainstreaming work Nan and now Steve Newlin, (who looked like he was about to cream his slacks when Chris Meloni was holding him up–not that I could blame him:) have done. But not before being outfitted with contraptions that both track their whereabouts and feeding habits and can stake them with just the push of an App button. Think of it as a deadly, portable house arrest blanket. Since torturing them with silver didn”t work–although it made Eric”s maker-in-sister-lover Nora show her true sanguista colors–Authority chancellor Salome decide to use her own special brand of interrogation. I guess her bedding Eric and Bill shouldn”t come as surprise, being that she is the Salome; you know, the one who wanted John The Baptist”s head on the platter and did the dance of the seven veils, at least if that US Weekly known as the bible is to be believed. They”re really pushing religion this season.

After her physical examinations come up with nothing, Salome tells Roman that Bill is still searching for something to believe in and Eric only believes in himself. Perhaps Bill”s uncertainty is a layover from all those years of trying to the fit the nihilistic mold Lorena made for him, or having his own merciful nature towards humans (i.e not torturing/devouring post-Lorena) co-opted and coldly marketed by vamps like Nan solely for political gain? Could Eric”s self-absorbed attitude stem from pre-hippie Godric”s “there is only survival or death” mantra? It”d be hard to argue that it isn”t, since the series has shown time and time again the lasting influence of a vampire”s maker. But who knows what our biblical-turned vampire femme fatale has in store our boys?

The werewolf story line rested on Alcide”s broad shoulders this week. Or his and the now deceased Debbie, whose parents have come looking for their daughter. Alcide tells them they broke up, or more accurately, he adjourned her, and that she”s probably hanging with a drainer now that she”s back on V. Nevertheless he goes searching for her and eventually asks Sookie about his ex. Unlike the Tara situation, Sookie doesn”t wait to be caught and confesses to killing Debbie, causing Alcide to growl, punch what has to be a massive dent in his trunk and takes off, not letting her know if he”ll take his newfound knowledge to the authorities. Sookie and Lafayette better get their stories straight, “cause something”s about to hit the fan. Of course, seeing Jesus”s demon in the mirror after he pours adds some bleach to spice up some gumbo could leave Lafayette more than a little shook up. Alcide may be a loner at heart, but the demise of he and Debbie”s relationship, Debbie”s actual demise and Sookie”s betrayal of their friendship could set him on a course to become the leader of the pack.

Not much going in shape-shifter land, thank goodness. Sam”s scene with Tara was more interesting than anything he”s had with Luna and Emma in a season and three episodes, though maybe now we know for sure Emma”s a were, things might actually become interesting. And, if Jessica”s fiend-like reaction is any indication, the fairies are coming back, a development I”m not all that thrilled about. Honestly, unless Sookie”s going to lead some type of fairy invasion/mutiny, I don”"t see how they fit in in any way, shape or form to what”s happening on the show now. They were only relevant to Sookie”s discovery of her true identity, and now that she knows that and is gaining better control of her powers, what”s the point of going there? At least, outside of Andy Bellefleur possibly being a fairy”s baby daddy.

Speaking of the humans, who knew this season would be the emotional maturation of Jason Stackhouse? Since the first episode, he”s actually been turning down sex and feeling remorse and confusion about some of his past escapades with women. But it”s not until he meets the teacher he was hot for (sorry had to Van Halen it) and had hot statutory rape sex with back in his school days that he gets a revelation about his promiscuous ways. After sleeping with her for old time”s sake, Jason realizes that sex long ago became and has been a distraction from an emptiness–his parents” death? only being seen as a handsome jock?–that he couldn”t put his finger on. No doubt the teacher”s, a.k.a Anna Draper”s, cat conjured up some unwelcome big mama kitty memories. Either way, the whole encounter leaves him cold and empty. See, that”s what happens when a you have a former Mad Men cast member on your show. You get all deep and introspective and stuff.

On a serious note, it was sweet the way Jessica pushed aside her libido to pursue the friend side of their friends with benefits relationship. They”ll probably end up having sex somewhere down the line, but perhaps this is the start of a deeper connection between them. Sweetness is the key word for Andy and Holly”s awkward, My Name Is Earl-esque romance (butt cheeks on Facebook!)and Andy asking her to go steady. Arlene and Terry”s Army story line still hasn”t taken off, but Carry Preston is paying it in her scenes. Her face is saying “you may give me scraps of screen time, but dammit I want my Emmy!” Here”s hoping this plotline takes off.

So what did you think of “Whatever I Am You Made Me?” Discuss.