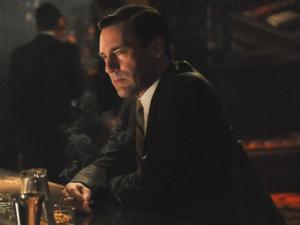 As always, spoilers lay ahead. So walk boldly or carry a big blindfold.

After a season marked by explosive moments–Don and Megan’s tumultuous S&M-tinged fights and makeup sex, Don’s murderous dream, Betty’s battle with the bulge, Joan prostituting herself, Pete’s beatdown, Roger’s LSD trip, Lane’s suicide–the finale, entitled “The Phantom,” was remarkably subdued, but not without the dark clouds of melancholy and dread that have hung over the Mad Men universe since Megan decided to play sexy chanteuse for her man in a roomful of strangers.

No doubt Lane’s chilling departure has more than a little to do with said dark clouds. Whether they like it or not, everyone is reacting to the sight of his lifeless corpse in his office. And in projecting what they think would have prevented a tragic situation or make its aftermath better, they reveal truths about themselves. For Joan, her former office pal’s tender admission that she could do his job has become a cold hard reality, as she has traded being office eye candy for the role Lane was so under-appreciated for: the voice of reason. The other partners are so distracted by “outside interests (Pete),” sheer impatience (Don) or just the usual lack of concern for money matters (Roger and Bert) that she’s forced to almost have a debate with herself over the idea of expanding SCDP’s office space.

While talking with Don, Joan racks her brain with what she could’ve done or said to stop him, but ultimately comes to the conclusion that sex would have given Lane everything he needed and brought him back from the brink. For Don money was and still is the answer; it covers Lane’s crimes and his debts, and will ease his family’s grief. A notion that blows up in his face when Lane’s wife dismisses the $50,000 that was her husband’s undoing as chump change compared to what the other partners truly owed him. For her it would’ve been better that Lane remained in his meager middle manager position than to attempt to aspire to anything more. Roger thinks of the act as a misguided attempt to find something better–philandering and dropping LSD will do trick for him in this life thank you very much, while Pete dismisses it as a weak cop out to the perpetually depressed housewife Beth.

And speaking of Beth, how awful and sad was it to find out her husband periodically ships her off to get electro shock therapy and to temporarily erase her emotional problems and permanently erase any short term memories. It makes Don’s secret talks with Betty’s therapist back in season one seem like an act of mercy.  No wonder she’s so unstable. It almost makes you wish Pete had gotten a few good licks in with Howard before getting punched in the face (again!) by the train officer after mouthing off. The lie to Trudy about his injuries coming from “another car wreck” was both darkly funny and an ominous omen for what may lay ahead for Pete in his Manhattan abode next season. Beth’s blank-slate demeanor in the hospital does provide Pete with a moment of clarity–that any boudoir action with his train buddy’s wife, or playing happy husband and father with Trudy in the suburbs, will only be “a temporary bandage on a permanent wound.”

Peggy, who got scant screen time, looks to be at home at her new job, reaming out the junior copy writers, smoking cigarettes and going to the movies to get the creative juices flowing. She runs into Don, and the two have a civil conversation about her career and her future. With her first out of town business trip coming up, she’s moving upward and onward, and the chance her coming back to SDCP doesn’t look too good right now. Though her female perspective is clearly missed by the firm’s clients. But Don wishes her well, and Peggy asks him to give Megan her love, so they may have come to some sort of mutual understanding. For now.

Doors are a frequent image in “The Phantom”–serving as a gateway for isolation, for escapism, to reveal one’s inner turmoil. And turmoil is something Megan is dealing with mightily; her acting career is still in the doldrums and her mother’s cruel remarks (“We can’t all be ballerinas”) and requests from fellow actors for to use her connection to Don to get them jobs are not helping. The latter brings up a lingering phantom that has been haunting her all season–there is not an area of her life, be it advertising or acting to her friendships, that is not entangled with Don’s. She is constantly being reminded of her rich housewife status, and her request Don throw her name into the model pool for a commercial, not to mention her drunken tumble into bed with Don almost feels like an admission of defeat.

Of course Don’s been trying not to wave the white flag for something far smaller–a toothache–but no less significant, at least metaphorically. The tooth keeps him from eating, from intimately interacting with Megan–two things essential for survival. If he’d waited any longer, it would have cost him his jaw. Seeing his dead brother Adam, who also hung himself, all over the place only adds to his sense of alienation and guilt. That he has to witnesses his youthful, optimistic bride in such a sad state is even more disorienting. It’s why he smiles so much when he views Megan’s screen test–it’s the perfect, pristine image he feel in love with and impulsively proposed to.

Marie advises to Don to use her daughter’s disappointment to his advantage so he can have the marriage he truly wants. It’s hard not to think he heeded her words when he changes his tune and helps Megan land the commercial–a move that goes against any artistic principles Don believed she had–then leaves to go to a bar and smoke a cigarette against the doctor’s orders. I think in Don’s mind, she has admitted defeat. Megan may have put on a good act and talked a big game–she was an independent, artistic woman with her own goals who was determined to succeed at any cost. However, by asking Don to help her, all that has become null and void.

Unlike Peggy, Faye, or to some extent Joan, she cannot blaze a trail without a man–in this case Don–clearing away the brush. She is a beautiful, glamorous woman whose identity is wrapped up in Don’s and whose success is orchestrated by him–the parallels between Betty’s short-lived re-entrance into modeling world and Don securing this job for her are inescapable. In short she has become Betty, albeit more driven and emotionally mature. When the beautiful blond asks him if he is alone, you can almost see the old Don Draper creeping back with every puff of the cigarette.

Don’s back in the driver’s seat, both at work and at home. It’s only a matter of time before he peels off and leaves Megan in the dust.

–I think it was wise choice by Matt Weiner and the writers not to try and go for another big, explosive moment. After the last two episodes, almost anything would’ve been a let down, save for Don Draper falling down an empty elevator shaft–which probably would’ve been criticized for being too obvious. Instead this episode dialed things back while setting up some tantalizing plot lines for next season.

–I am highly disappointed Dawn barely had a story line this season. There is a lot to explore with her character beyond the cliched civil rights, dogs and fire hoses stuff–which can be dealt with as well. Mad Men has done such a consistently good job of going beyond the well-worn issues of the decade–sexism, racism, burgeoning feminism, the increasing focus on youth culture–by making the show’s characters respond to these topics as real life, three dimensional individuals, rather than have them merely be symbols of said topics. I see no reason why Dawn can’t get the same treatment.

So what did you think of “The Phantom?” Discuss.