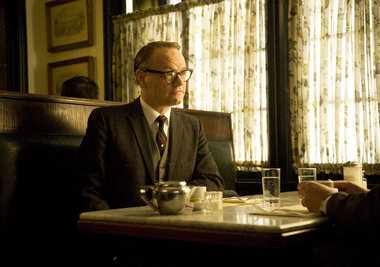 As always, spoilers lay ahead, so watch your step.

Sally becomes a woman, Betty becomes a mother (at least temporarily), Don tries to kick-start his wunderkind mojo, and Lane well…you know what happened to Lane. There’s no avoiding it, so let’s dive headlong into the darkness shall we?

The episode opens with Don in the barbershop getting a trim, when another ad man congratulates him on snagging Jaguar. Of course after last week’s  ”The Other Woman,” we know all that was involved in getting that account, and it’s left a hell of a bad taste in Don’s mouth. “I already said no. Or should I leave so you all can do whatever you want?” he mouths off during a meeting. His demotion from office alpha male still stings. The steely look on Joan’s face says it all–though it may hurt, she’s adjusting to her new position with characteristic aplomb, sitting at the conference table with the other partners like the logo read Sterling Cooper Draper Pryce Harris from the jump. Don’s not the only one feeling a post-Jaguar hangover though; the entire fiasco is lingering in the air like the smell of weeks old garbage. Even happy-go-lucky Ken is in a funk–”I don’t wanna be a partner. I’ve seen what’s involved,”  his tells Roger over drinks, rendering our favorite loquacious silver fox momentarily speechless. And he refuses to share his father-in-law’s account with Pete Campbell, otherwise known as the main source of the stench.

But back to the lecture at hand. Don’s dissatisfaction does bring out the fighter in him; he practically gives Ed Baxter–who told him no one would ever work with him after the infamous Lucky Strike letter–a tongue lashing for actually being happy with his company’s success. He gives Sally the day off from school because he has a meeting with the aforementioned Baxter, while neglecting to inform Megan that Sally’s even sleeping over. And he’s cold as ice when he tells Roger to fire Ken if he stands in the way. Post-Peggy, it looks like ambitious, self-interested, workaholic Don is back and in full affect. Though it remains to be seen if he and everyone else will bounce back after Lane meets an unfortunate end.

Lane’s undoing starts the moment Bert Cooper walks in Don’s office, brandishing a check for “Christmas bonuses” with his forged signature. Confronted by Don, Lane quickly cracks under questioning and confesses. Lane’s reaction is gut-wrenching, even before we know what his fate will be–he’s by turns humiliated and resentful, angry and remorseful, defiant and self-pitying. All the other partners are/have gotten rich since SCDP has been in business, while Lane drowns in debt. Like Joan, he has made an extreme, life-changing sacrifice , while the other partners walk away largely unscathed.  Don tells Lane he could have always asked him for the money. But he’s missing the point; in Lane’s mind, he shouldn’t have to.

Don shows him mercy by not calling the cops or telling the other partners, but it’s not much of a gesture in the grand scheme of things. Lane now faces to possibility of losing his Visa and going back to London in disgrace. And if his father’s still the same crotchety old man who whacked him with a cane for having an affair, and his wife reverts back to her sour, home-sick demeanor, it’s easy to see why Lane isn’t all that eager to start over. He also manages to further alienate Joan, his closest office ally, by coldly quipping that she’d probably like him to imagine her “in some obscene bikini” when she talks about her Easter vacation plans.  A cruel, sexist thing to say, especially in light of recent events. “I think you should take your party elsewhere,” she snaps.

However, the real twist in the knife is when Lane comes home to find his wife in festive mood, ready to go out. And what’s waiting for Lane in the parking lot? A Jaguar she got for him as a surprise. Lane looks like he’s about to implode– the car is a tangible manifestation of his ruined career, a toy Don a could write check for without breaking a sweat, an opportunity to become an account man snatched from him. And there it sits, mocking him. His wife continually pushes him to take it for a spin, unknowingly sticking the dagger in further. Lane does decide to go for one last ride , clogging up the exhaust pipe and turning on the gas to suffocate himself; but true to the Jaguar’s nature, and in perhaps this series’ blackest twist of irony, the car won’t start.

I’ll admit that after his failed suicide attempt, that I thought the writers were giving us a classic Mad Men fakeout, a la Don coming to visit Joan at her apartment after she already slept with dealership head Herb. Or that it was a dream sequence. Then again, Matt Weiner and the writers have been messing with our heads the whole season; from Pete talking about  life insurance covering suicide to Don drawing a noose in a meeting and staring down an empty elevator shaft, to Megan lying like a corpse in an acting class, death imagery has been virtually omnipresent.

Still, I was not at all prepared for the actual scene. When Joan tries to open the door to Lane’s office and hits the leg of a toppled chair, I knew the writers had faked us out, but in the way I’d hoped. Joan informs the others, who send everyone home. Don, all to familiar with suicide, and perhaps feeling some deja vu–he gave his brother Adam similar advice (“start over, move forward”), and threw money at the situation, and he met the same fate as Lane–insists on cutting Lane down and laying him on the sofa for the coroners. The entire sequence has to be the saddest, darkest moment in Mad Men’s history–there’s no snappy one-liner from Roger, no wheeling Lane’s body out of the office covered in blanket Miss Blankenship-style to lessen the impact.  This is death– in all its awful, unexpected, uncomfortable, inconvenient bleakness. After laying Lane’s body down, the partners find a note– his resignation. Perhaps it was Lane’s way of following Don’s advice, and going out with elegance. Damn, sometime I hate that I love this show.

Lane’s story was so harrowing the Betty/Sally/Glenn/Megan arc pales in comparison. But it did add some much needed lightness to this episode. Sally, still being a brat and pushing all of Betty’s buttons (“She lets me eat whatever I want–Birdie, you’ve created a monster), gets dropped off and Don and Megan’s after refusing to go on a ski trip. Not only does she smart off to Don, she’s also scheming to meet Glenn while she’s in the city. The two plan a typical playing hooky outing, going to the museum and complaining about the time-honored pre-teen woes of parents, bullies and school. I may be reading him wrong, but I think Glenn wants to be more than friends. He tells her he told his classmates that he was going to visit her so they could “do it” to fend off the bullies, but the way his face deflates when she tells him she doesn’t like his mustache says otherwise.  He tries to save face (no pun intended) and says he forgot to shave (like he needed to), but that’s a lie. What guy isn’t proud of a little peach fuzz at that age? He “forgot” because he wanted Sally to see him as a man. Unfortunately for him, mustaches just aren’t her thing.

While Glenn may be trying to be a man, one anguished trip to the lady’s room lets Sally know she’s a woman, ready or not. Terrified, she doesn’t call her gal pal/stepmom Megan–who did give some decidedly motherly advice when she said “holding hands is enough” when talking boyfriends–but runs home to Betty, who looks startled when her daughter falls into her arms. Underneath all the attitude and big-girl talk, she’s just a scared kid. There could be some subtext to Sally and Lane’s stories–Sally’s terror at realizing she’s now able to birth life, Lane’s grim determination to end his life–but at this moment I’m sure what that subtext is, so let’s get back on track.

Betty being Betty, she can help but get a few digs in while reassuring a panicked Megan Sally is safe. “She needed her mother” Betty says, her satisfied smirk almost leaping through the phone as she slyly lets Don’s “child bride” know the deal: “You may be the fun one, but when things really hit the fan, she comes home to Mama.” All cattiness aside, a genuinely tender moment happens between the two when Betty sweetly explains the burden and the joy of being a woman. Betty’s smile doesn’t just come from getting one up over Megan, but from actually being needed. From being acknowledged.

Don also takes time out to be a mentor to a throw-away kid in the making. After finding Glenn in his apartment, he decides to give the boy a ride home. “Everything you think is gonna make you happy, just turns to crap,” Glenn says in the elevator, giving voice to sentiments that have probably been running marathons in Don’s mind. Still shell-shocked from Lane’s suicide, Don will have none of Glenn’s cynicism and asks him a simple question: “What do you wanna do?” For Glenn, that’s driving Don’s car, which provides a poetic and hopeful end to a chilling episode. While a car was Lane’s death sentence and almost served as his literal coffin, for Glenn, it’s a pathway to freedom and, at least in that moment, happiness.

–After this episode, I have absolutely no idea how this season’s going to wrap up. And that both thrills and terrifies me.

–I’ve pretty much given up all hope that Dawn will any semblance of a story line. Oh well, season six is just one year away.

–Obviously the title of this episode applies to more than just Lane, who paid the biggest fee for his deeds. Megan has to continually remind Don that she’s an actress, not a stay-at-home wife with limitless time on her hands, a cost she must pay for leaving his world; Don’s cost for focusing all his attention on Jaguar is that he’s lost Peggy, and that drumming up big business in the wake of Lucky-Strike gate will be an uphill battle. As for Joan, every time the words “partner” and “Jaguar” are mentioned, someone will be thinking of her–and it won’t be in the best light. She’ll keep paying for her decision, whether it s flippant remarks from Don or shaming/pitying comments from Cosgrove.

–Speaking of Ken, he clearly doesn’t approve of the direction SCDP took with landing Jaguar. Could he be joining Peggy at  her new agency gig?

So what did you think of “Commissions and Fees?’ Discuss.