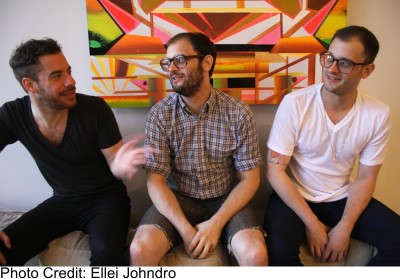 Not many band formations happen over the course of a cab ride on a cold, Brooklyn night, but such is the story of  trio Punches, whose effervescent brand of indie pop was born out of longing for warmer weather and the perfect summer soundtrack to accompany it. Unlikely circumstances, but when inspiration knocks, you have to answer.

When the release of their EP It Can Only Get Better, Punches–comprised of vocalist, composer, and producer Alan Astor and tw

in Finger On The Pulse DJs Greg & Darin Bresnitz–have turned cab conservation into reality, with buoyant tracks like “Can I Live,” a mid-tempo dace romp featuring a pulsating bass and burst of brassy horns, while the Ducky Remix takes the song straight to clubland by giving it a minimalist house spin.

Listen to and download the remix, as well as watch the video for “Can I Live” below.

PUNCHES- Can I Live (Ducky Remix) by punchesbk