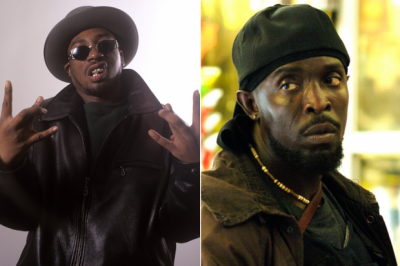 This should be interesting. When news of a biopic of late Wu-Tang Clan rapper Ol’ Dirty Bastard was first announced late last year, names like Tracy Morgan and Eddie Griffith were rumored to be vying for the role. Now it’s been revealed Michael Kenneth Williams, best known for his iconic role as Omar Little from The Wire, will be playing the MC.

The film in question, entitled Dirty White Boy, is slated to be directed by “99 Problems” cinematographer Joaquin Baca-Asay and will cover the last years of ODB’s chaotic life. However, matters are bit complicated by the fact that there are two biopic treatments on ODB happening at once.

According to SPIN, Dirty White Boy was written by former VH-1 employee Brent Hoff,  friend of Jarred Weisfield. Weisfiled was the rapper’s manager during his three-year prison stint, and his attempts to try and control the talented but infamously erratic MC form the basis of the script. Meanwhile, ODB’s cousin Raeshawn’s script is still making the Hollywood rounds, with the aforementioned Griffith and Morgan still vying for the role.

However, age could prove an issue for whoever is cast. Williams is 45, a decade older than ODB was when he passed. Of course with a few makeup tricks and soft lighting, playing thirty-something will be a lot easier compared to Griffith or Morgan, who are both in their forties, playing the rapper during the Enter The Wu-era of his mid-twenties.  If you’re just dying to see Williams in a music-related role ASAP don’t fear: he will reprise his role in the third installment of R.Kelly’s never-ending Trapped In The Closet.