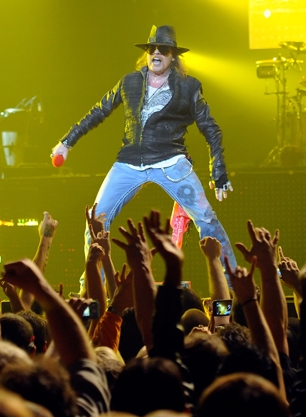 After touring extensively throughout 2011, Guns N’ Roses seems to be starting off 2012 the same way, annoucning six club dates beginning in February.

Axl and the rest of the band will kick off the tour at the Roseland Ballroom in New York on February 10, and will play other NYC gigs at Terminal 5 and Webster Hall on February 12 and 15. The latter club will be rechristened in its old name The Ritz, in honor of the band’s 1998 performance there.

The band also unveiled an eight-date European tour slated to begin this summer. Fans may also get a chance to see the original GNR lineup in action when the group gets inducted into the Rock and Roll Hall of Fame. Drummer Steven Adler told Rolling Stone that “I personally just want to finish what I started with those jack-offs. We started off something, let’s end the career playing together, at least once. I’d love to do a whole tour of the world. I personally – and I know that Slash and Duff feel the same way – we owe it to the fans to do a tour around the world. We haven’t performed for over 20 years and they’ve stuck by us and believe in us.”

View the tour dates below.