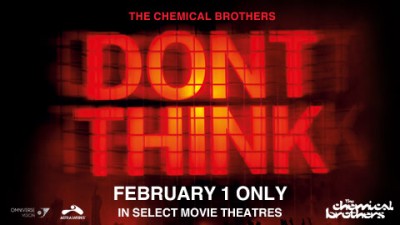 Grammy-winning electronic music pioneers The Chemical Brothers are bringing  their hotly anticipated concert event The Chemical Brothers: Don’t Think to select movie theaters nationwide for a one night only event in February.The film, slated for release on Wednesday, February 1 at 7:30PM local time, will be broadcast to more than 200 select theaters across the country through NCM’s exclusive Digital Broadcast Networ. Presented by NCM Fathom, Omniverse Vision, Astralwerks and Black Dog Films, tickets for The Chemical Brothers: Don’t Think are available at participating theater box offices and online at www.FathomEvents.com. For a complete list of theaters and prices, you can visit the NCM Fathom website.

“In the recording of a single show – a single night on a Japanese mountainside – Adam Smith, our longtime collaborator, has managed to capture the atmosphere of a very special festival appearance,” Chemical Brother Tom Rowlands said. “Come see how it feels to feel, be overwhelmed, intoxicated, swoonerated… Surrender to the void.”