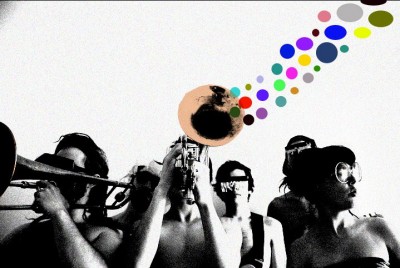 Brooklyn eight-piece Rubblebucket have added more dates to their extensive U.S. tour, with new November gigs tacked on in cities including Los Angeles, San Francisco, Austin and Atlanta, as well as a show at NYC’s Bowery Ballroom in January.

All of this non-stop touring is in support of the group’s breakout album Omega La La. Released this past summer, the album’s mix of indie pop, catchy melodies and Afro beat influences have garnered rave reviews from outlets like Blurt, Stereogum and Paste Magazine.

Success hasn’t tempered the band’s offbeat quirkiness however, as their new video for “Down In The Yard” proves. Dancing graveyard people, floating eyeballs and faces appearing on headstones are just a few of the creeptastic images the band conjure up. View the clip, as well as the band’s tour dates, below.