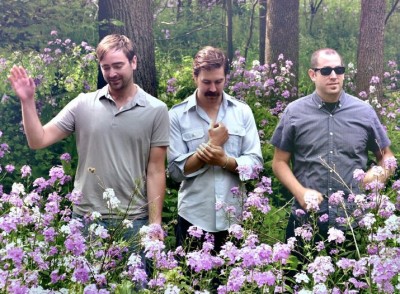 Electro-folk band Icarus Himself began three years ago as the brainchild of frontman Nick Whetro, before expanding to a trio with baritone guitarist Karl Christenson and drummer Brad Kolberg. Since then the group has released three albums, 2009′s Coffins, last year’s Mexico EP and their latest release, the concept-driven Career Culture. With an upcoming  U.S. tour set to stretch into next spring, the band seems poised to take their sound beyond their Midwestern roots. In a quick chat with Indies and The Underground, Whetro talked about the band’s origins and the musical and lyrical inspiration behind Career Culture.

What inspired the name Icarus Himself?

I got the name from a Jean Michel Basquiat print titled “Icarus Himself.”  It really has no significance other than I liked the sound of it.
Icarus Himself started as a solo project. How did it come together as a trio?
Karl was in my other band, National Beekeepers Society, so I kinda asked him to sit in on baritone at live shows and eventually on the first full length Coffins.  Brad  was friends with Karl, they had previously played in a few bands in the past in Madison and Eau Claire.  Karl and I wanted a live drummer, we had been playing to samples, and Brad was our first choice.  As a drummer he’s suprisingly musical and has very tasteful style.
How is Career Culture different from your previous releases sonically and lyrically?
I’d say sonically it’s more subtle.  With this record we wanted to get the point across with less.  So we ended up tracking less and doing less overdubs.  We were trying to get more of a live band in a room sound.  Something more primal.  I feel the lyrics on this album are a bit more personal than previous releases.  I’m not singing about amputees and people falling in love with cadavers anymore.  It’s all coming from my life.
Several songs on Career Culture, like “Wake Up” and “Mornings At The Bar,” talk about the small town, dead-end job lifestyle, and the desire to escape it. Were those songs and others influenced by the United States’ currently economic climate?
Those songs were about my time in Fremont, IN about 9yrs ago.  I was actually way more financially stable at that point, but was completely miserable working in a factory in a small town.
The album owes a debt to David Bowie and The Who, two of your major influences, both in it’s eclectic sound and for its conceptual feel. What is it about those two artists that inspires you?
I’m not sure.  Actually, I think I borrowed more from Brian Eno and Deerhunter than Bowie or The Who.  Though, I’m still inspired by both artists and I think that shows by the conceptual feel of the album.  And maybe a bit of Bowie’s vocal style comes through every so often.
What other musical influences do you have that might surprise people?
I love Curtis Mayfield.  And soundtrack music.  Especially old zombie flicks like Zombi and Dawn of the Dead.
Your music blends a lot of different sounds and styles–electronic, psychedelic, folk, indie rock–together. Is it difficult to pull all of these disparate sounds together in a way that feels organic?
I don’t find it difficult to have different sounds on one record, because I always find it boring when a band sounds the same on every song or every album.  We have different tastes that come through, but we don’t try to hide them.  To tell you the truth, I have no idea what we sound like.  I’m too close to the songs to know.
How does the songwriting/production process usually happen?
It varies.  Sometimes I’ll have a full song idea ready on the sampler, or demo, and show it to the guys and they put their parts down and sometimes I just have a simple chord progression and some vocal melodies and we just play it at practice for a few months until something comes out or it doesn’t work and we scrap it.  This record has 4-5 songs that I had recorded a few months before we actually went into the studio.  The guys just kinda fleshed out their parts while they were there.
The video for “On Your Side” has some obvious Kill Bill/Natural Born Killers overtones. Who came up with the concept?
An acquaintance of ours, Ryan Herarly, and his friend Jordan Liebowitz.
Was there a deeper meaning you wanted to get across with the video, or was it more of a simple, tongue-in-cheek gag?
We didn’t really have much to do with the video, other than 2 of us being extras in it.  The underlying theme of the song is trust in your partner.  It seems like the video achieved that on some level.
What are you top three favorite songs on the radio right now, and why?
I don’t really listen to the radio, but my 3 favorite songs I’m listening to right now are…….Sat. Nite Duets “Peel Away” One of my favorite bands in Wisconsin…Deerhunter “Don’t Cry” so gritty and beautiful…. Brian Eno “On Some Faraway Beach” favorite song
What can fans expect from you next?
Maybe some soundtrack music.